Possibility of arson being considered for fire in Germany 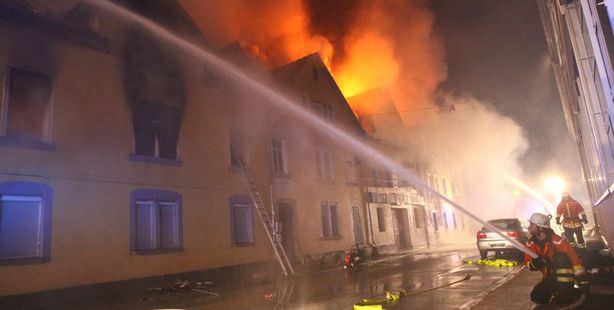 Seven children and their mother were killed in a fire which went ablaze on Sunday in a building in Stuttgart, Germany housing 11 Turks.

A fire that erupted in a building in the Backnang district in Stuttgart, Germany early Sunday morning led to the deaths of a mother and her seven children. The mother, Nazlı Özkan, was actually saved from the fire by a Greek neighbor who carried her outside of the building, however the mother of seven is said to have headed back into the flames in order to save her children. The cause of the blaze, resulting in the deaths of eight Turks, has yet to be determined.

Killed in the fire, which ignited at 05:33 am Sunday, was Nazlı Özkan (40), her six-month-old-baby Murat, Ahmet (3), Yasin (6), İzzet (7), Abdülkadir Soykan (8), Yılmaz Oruç (14) and Hatice Oruç (17). A Greek bar owner from the building next door was the first to intervene in the fire, managing to save Nazlı Özkan, İbrahim Soykan, the children's grandmother Hatice Özkan and their uncle Ahmet Özkan, however Nazlı Özkan supposedly re-entered the flames in order to save her seven children that still remained inside. Eye witnesses quote the mother as saying, "I will not leave without my children."

'FIRE MAY HAVE BEEN CAUSED BY FAULTY HEATER'

Police believe the fire may have been the result of a faulty heating system and say they have not collected any evidence pointing to the possibility of arson. Neighbors remarked that the house where the Turkish family resided had an extremely problematic electrical system and said, "We would hear sounds every time they turned on a lamp in the house."As a result, speculation at present is that the fire may have been ignited from an electrical malfunction and then quickly spread throughout the three-level building. According to local residents the building, which used to be a leather factory, was poorly transformed into attached residential buildings. The building that went ablaze was surrounded by a Turkish-German Family and Cultural Association on one side and two beerhouses on the other. Both beerhouses, which were full at the time of the fire, were evacuated. Nearly 50 relatives flocked to the devastating scene. Some suffered nervous breakdowns and were treated on site.

The fire department made it to the blaze just seven minutes after receiving the call. Over 100 firefighters and numerous fire trucks were deployed from surrounding towns to help contain the fire. The fire department had to pump water from a nearby river in order to have sufficient water for their extinguishing efforts. A police spokesman has stated that the bodies were found in two rooms on the second floor of the building.

Originally from Afyon, 40-year-old Nazlı Özkan was a mother of four children from her first marriage and six children from her second marriage. Supposedly her second husband Sami Soykan left Nazlı Özkan three months ago after which she began living with her brother Ahmet Özkan and her mother Hatice Özkan. When Sami Soykan, father to six of Nazlı Özkan's children, heard news of the fire, he suffered a mental breakdown and had to be admitted to the hospital for treatment.

'THIS INCIDENT IS A COMPLETE TRAGEDY'

As soon as he received the news of the fire, Turkey's Ambassador to Berlin Hüseyin Avni Karslıoğlu boarded the first plane to Stuttgart. Commenting on the blaze, Karslıoğlu said, "This has deeply wounded us. This incident in its entirety is a tragedy." Stuttgart Consul-General Mustafa Türker Arı was overcome with sadness and was periodically unable to contain his tears.

Deputy Prime Minister Bekir Bozdağ also commented on the fire by saying, "It is too early to say whether it was arson or not. However, the true cause of the incident must be uncovered in a manner to ensure that there is absolutely no room for doubt."

This is a translation of an article originally written by Mustafa Borak, Mehmet Kılınç and Mert Ulcay.