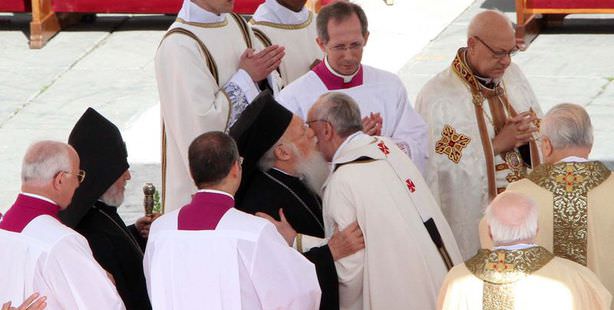 The new leader of the Catholic world Pope Francis was inaugurated at a Mass held at the Vatican on Tuesday.

Addressing up to 200,000 people including many foreign leaders gathered under bright sunshine in St. Peter's Square, Pope Francis was formally installed as head of the world's 1.2 billion Roman Catholics.

Fener Greek Patriarch Bartholomew also attended the Mass, marking the first time a spiritual leader of the Orthodox world has attended such an inauguration in 959 years since the Great Schism between the Eastern and Western Church in 1054.

After being elected by a secret conclave of Cardinals last Wednesday, Pope Francis official begins his tour as Pope today. Prior to the start of the inaugural Mass at the Vatican, the Pope waved to the hundreds of Catholics who flocked to the event from a white jeep, a far cry from the bullet-proof Papamobile of the past. At his inauguration, Pope Francis set the tone for a new, humbler papacy and called on the Church to defend the weak and protect the environment. Representatives from 160 nations were also in attendance with Deputy Prime Minister Bekir Bozdağ representing Turkey.

Fener Greek Patriarch Bartholomew's attendance marked the first time an orthodox spiritual leader has attended the ceremony in 959 years. Commenting on his decision to attend the Mass, Bartholomew said, "I felt like I wanted to go," on a live television broadcast on NTV.

"Beneath this gesture lies the importance I attribute to the amicable relations between the two churches. With this trip I want to underline the recent progress in our relations. I hope that this amicable relationship will continue during the new Pope's era. The new Pope is humble and has won over everyone's hearts," Bartholomew said.