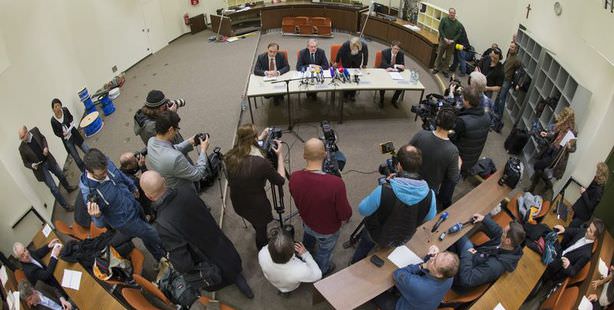 The German court where the trial for the murder of ten individuals, eight of which were Turks by the National Socialist Underground (NSU) terrorist cell, has failed to reserve seats for the Turkish ambassador as well as members of the Turkish press, which has resulted in widespread reaction.

The case involves a series of killings by the terrorist neo-Nazi ring which were dubbed the "döner murders". On April 17th in Munich, Beate Zschaepe, the sole living member of the neo-nazi NSU group responsible for the killings will go on trial for murdering eight Turkish citizens, one Greek citizen and one police officer between the years of 2000 and 2007.

Despite the expectation the trial will draw immense public interest; the German court has refused to reserve seats for Ayhan Sefer Üstün, head of the Turkish Parliament's Human Rights Investigation Commission, and Hüseyin Avni Karslıoğlu, the Turkish ambassador to Germany, while also failing to accredit members of the Turkish press.

Social Democratic Party Chairman (SPD) Sigmar Gabriel commented on the upcoming trial by stating, "To not accept a single member of the Turkish press definitely sends the wrong signal. This sort of procedure will only result in mistrust."

SPD Deputy Chairman Aydan Özoğuz criticized the fact that the trial is being held in a hall that will not be able to accommodate the Turkish and foreign press due to its limiting size. Germany's Journalism Union Chairman Cornelia Hass stated, "We should not be repeating the negligence which has transpired up until now."

This is a translation of an article originally written by Cemil Albay and Mesut Hastürk.