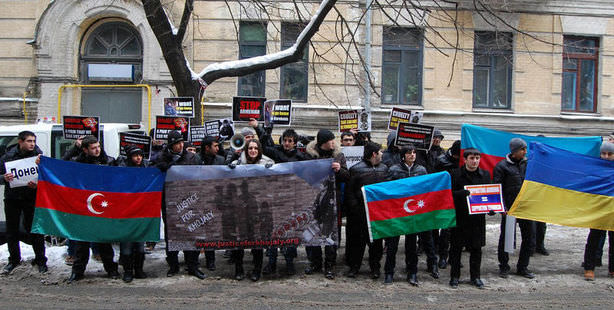 The U.S. state of New Jersey has issued an Assembly Resolution recognizing the Khojaly massacre of 1918 and declaring March 31st as Azerbaijani Remembrance Day.

The resolution comes as a result of efforts by Pax Turcica and was presented to Tomris Azeri, president of the Azerbaijan Society of America for its approval.

The New Jersey Assembly Resolution, drafted by Assemblyman Thomas P. Giblin states, "The genocide of March 31, 1918, in which more than 20,000 innocent Azerbaijani people lost their lives, was an even that represents one of the most condemnable atrocities in the history of the world."

In 2012, New York was the first U.S. state to issue an Assembly Resolution acknowledging the Khojaly massacre.

On February 26th, 1992 the Armenian army used the worst forms of torture to kill 613 civilians, including women, children and the elderly in Azerbaijan's Khojaly village, located in the higher Karabakh region.
Out of those killed in the massacre, 83 were children, 106 were women and 70 were elderly. A total of eight families were completely eradicated. There were 487 people who survived heavily wounded and 1,275 people were taken hostage, with 150 still missing. Inspection of the bodies showed evidence of burning, a number of people's skulls were skinned, eyes were carved out and body parts, such as noses, ears and heads dismembered. Women and children were also subjected to the same savagery.