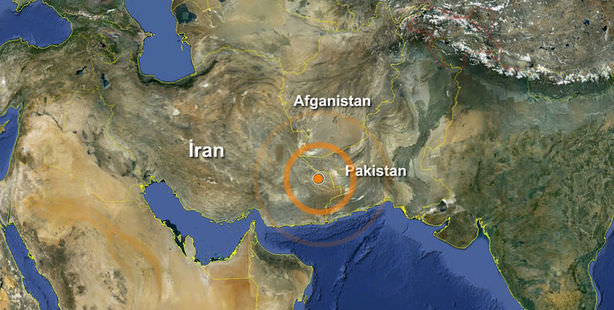 A 7.8 magnitude earthquake struck Iran near the border with Pakistan earlier on Tuesday. The earthquake was felt in neighboring Pakistan as well as in India and Gulf states. Turkey’s AFAD is mobilizing to send teams to the region.

A powerful earthquake struck southeast Iran near the border with Pakistan on Tuesday but with communications to the area badly disrupted, officials gave differing assessments of the casualty toll. Reports are coming in that there may be 40 casualties and 850 wounded.

Tremors from the 7.8 magnitude quake were also felt as far away as India and Gulf states. The quake was centered in a remote desert and mountain region which is not densely populated. Assessing the damage was difficult due to the collapse in the communications network.

"It was the biggest earthquake in Iran in 40 years and we are expecting hundreds of dead," an Iranian official said. Iranian state television said at least 40 people were killed but acknowledged it had no official confirmation. Reports are also saying that 1,200 buildings have been demolished. A Pakistani official said at least five people been killed in Pakistan. Reports say there may be up to 850 wounded.

The U.S. Geological Survey said the quake hit at 10:44 GMT at a depth of 15.2 km. The epicenter was 201 km southeast of Zahedan and 250 km northwest of Turbat in Pakistan. The Iranian Red Crescent's Mahmoud Mozaffar told state television that rescue and evaluation teams have been sent to the afflicted area.

SECOND IN A WEEK

It was the second big quake to hit Iran in a week. On April 9, a powerful 6.3 magnitude quake struck close to Iran's only nuclear power station, killing 37 people, injuring 850 and devastating two villages.

TURKEY'S AFAD TO SEND TEAMS TO THE REGION

Upon hearing news of the 7.8 earthquake which took place in Iran, the Prime Ministry Disaster and Emergency Management Presidency (AFAD) has immediately begun mobilizing to send search and rescue and first aid teams to the region.

An announcement by AFAD stated that Civil Defense Search and Rescue teams from Van and Erzurum as well as teams from the Health Ministry's National Medical Rescue (UMKE) and the Turkish Red Crescent Society are also currently preparing to depart for the region.

"In response to Iran's call for international assistance, search and rescue, medical and humanitarian aid teams will be heading to the region. We will be tracking the developments," the AFAD announcement stated.