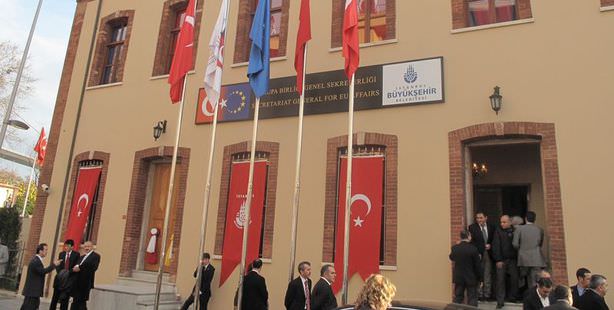 The EU Ministry’s Ortaköy office, which hails a view of the Bosphorus, has been returned to its original owners, the Greek community. Turkey has gone ahead and solved a property dispute that has been ongoing for 28 years, without waiting on a verdict from the ECHR.

Turkey's Directorate General for Foundations (VGM), which oversees the minority foundations in the country, has decided to return the European Union Ministry's Istanbul office in Ortaköy to its original owners.

The building in Ortaköy was originally a Greek community school, however due to the insufficient number of Greek students at the time; the Ortaköy Metropolitan Municipality confiscated the building in 1985 and decided to demolish the building and turn it into a park. However, the building was left empty and unkempt for years and was never torn down. Three years ago the building was appropriated to the Turkey's European Union Ministry. The derelict building was then renovated and the EU Ministry began using it as their Istanbul office.

The Ortaköy Greek Community filed a case in 2003 for the return of the property, however when the verdict remained inconclusive they then applied to the European Court of Human Rights (ECHR). However, before the ECHR even had a chance to hear the case, Turkey's Directorate General for Foundations (VGM) announced the decision to return the property to the Ortaköy Greek community to Laki Vingas, the representative for the minority foundations in the General Assembly Council of the VGM at a meeting held in Ankara on Tuesday.

EU Minister and Chief Negotiator Egemen Bağış stated that they have been closely following the ongoing process, however due to a verdict never being handed over; they decided to go ahead and fulfill their legal obligations regardless.

The fact that this decision to reappropriate the property to the Greek community was made prior to the dispute being tried at the ECHR has been well received and considered to be yet another positive move by the Turkish government in representing their sensitivities for minority foundations.