Neo-Nazi trial’s defense continue to put on a display 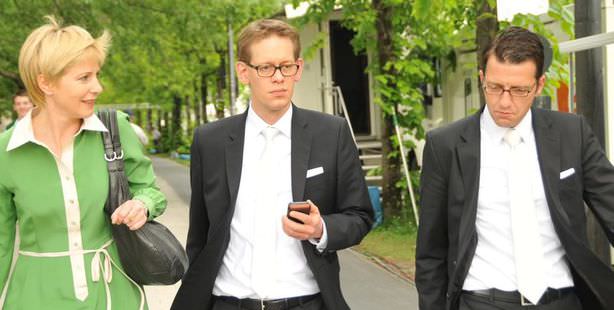 In the third hearing of the ongoing neo-Nazi NSU trial in Germany, defense attorneys called for two prosecutors to be replaced and for the case to either be dropped or postponed for three weeks. One of Zschaepe’s lawyers removed his frock and walked out of the courtroom.

The defense attorneys in the ongoing trial of the far-right National Socialist Underground (NSU) cell which committed a series of ten murders in Germany, eight of which were Turks, quite literally put on a show at the third hearing held Wednesday.

The suspects began to deliver their testimonies yesterday in the third hearing of the trial indicting Beate Zschaepe and four others for the racism motivated murders of ten in Germany. However, the defense attorneys continued their attempts to further delay and disrupt the trial. In the first session of the trial held on May 6, defense lawyers accused the presiding judge of bias and managed to postpone the trial by a week. The case resumed on Tuesday to requests by the same attorneys to change courtrooms and replace the acting judge. On Wednesday's hearing the defense had three new requests: to be given the first word, for two prosecutors to be changed and for the case to be either dropped or postponed for three weeks.

With 600 witnesses, 49 lawyers representing 71 joint plaintiffs and a bill of indictment against Zschaepe that is nearly 500 pages long, it is widely expected that the NSU trial could drag on until 2014.

On Wednesday's hearing, defense attorneys requested that Federal Prosecutors Herbert Diemer and Anette Greger be replaced and for the trial to either be dropped or postponed for three weeks. The defense attorneys accused the Federal Prosecution of not handing over important documents in the case. Nicole Schneiders, the attorney for suspect Ralf Wohlleben requested that the case be dropped entirely because the suspects were being subjected to impartiality by the media. Schneiders also requested to see the file on Michele Kiesewetter, a German policewoman who was one of the ten victims in the murders, claiming that it was not included in the case file.

Schneiders also accused a number of secret service organizations of being involved in the murders. The Federal Prosecutor stated, "There is no evidence pointing to involvement of any governmental department in the murders."

The third hearing was also marked by a debate between Federal Prosecutors, co-plaintiff attorneys and defense attorneys over who would begin their delivery first. As giggling was heard from the audience in the courtroom the issue quickly escalated into a heated conflict. Zschaepe's attorney ended up removing his frock and stamping out of the courtroom saying, "This is no way to hold a trial."

This is a translation of an article originally written by Rahmi Turan.