Over 1.5 million refugees result from the war in Syria 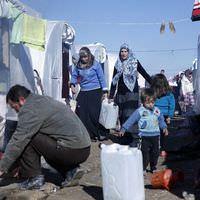 Since the start of the war last year, the number of refugees fleeing Syria has reached over 1.5 million announced the United Nations Refugee Agency.

"The Syrian conflict continues to have a devastating impact on the lives of those who are forced to flee" said Dan McNorton, spokesman of the UNHCR.

"Refugees tell us the increased fighting and changing of control of towns and villages, in particular in conflict areas, results in more and more civilians deciding to leave. Over the past four months we have seen a rapid deterioration when compared to the previous 20 months of this conflict" said McNorton.

The conflict in Syria has seen the neighboring countries of Jordan, Lebanon and Turkey take in massive amounts of refugees. There are currently around 320,000 Syrian refugees in Turkey, with a further 30,000 awaiting registration to enter the camps.