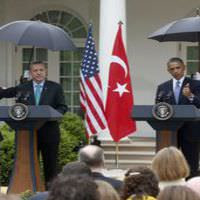 As was expected last week Prime Minister Erdoğan was hosted in a most prestigious way by Obama. What was possibly the most important part of this visit and definitely the most memorable, was that it was the first time since Turgut Özal that any Turkish leader recieved this high a level of welcoming.

Morton Abramowitz, the ambassador stationed in Ankara at the time, is the one that has been frequently referring to this visit as historic, paralleling it to the one undertaken by Özal, in Turkish newspapers. However magnificently Prime Minister Erdoğan was hosted, Morton Abramowitz, an admirer of Özal in more ways than one, has on more than one opportunity reminded the Turkish press of the time Bush Senior hosted Özal for a full two days at Camp David. However, though he might have not been hosted at Camp David, look at it however you will, the attention that was shown to Erdoğan was striking. Whether it be the three-hour committee meeting at the White House, or the magnificent lunch with Vice President Biden and Foreign Minister Kerry to honor the Prime Minister and maybe most importantly the dinner where Obama and Erdoğan once again met and spent a further two hours together, however you look at it, the fact that the United States Government spent nearly an entire single day on Erdoğan, is quite telling.

Of course this level of attention and this amount of allotted importance being so especially high for Turkey also results in increasing expectations by an equal amount. The expectations on the Syrian Issue in Turkey especially, some of them unrealistic, had me openly concerned. Some groups in Turkey that are unable to comprehend the atmosphere in Washington had such expectations as, "Prime Minister Erdoğan can convince Obama on the Syrian issue and get him in motion" and "the meeting is the last chance for this to transpire", notions which were created out of thin air that pointlessly raised the potential of demoralization to great extents. Therefore my fear was that in an atmosphere with these high expectations, the classic "the mountain brought forth a mouse" comments were to be made. However, there came no need for these comments. Because Prime Minister Erdoğan will act realistically, it appeared as if he limited his own expectations on the Syria issue. From my interactions with Americans after the visit, it is my observation that the mindset is that on the Syrian Issue Erdoğan was not as hard and demanding as expected. Instead the Americans were presented with a leader that brought forth his ideas cool-handedly and analytically giving diplomacy another chance.

Turkey's realistic treatment of the Syrian issue allowed for other important topics to be taken in hand in detail. These other topics, such as economic and trade relations, relations with Erbil, potential issues and opportunities in Baghdad, his impending visit to Gaza and relations with Israel and of course determining a joint strategy on the topic of Iran. In the end, the Syrian Issue made a mark on this this visit due to the outcome, which will remain in our minds as being "Instead of war continue with diplomacy." But this time, a diplomacy that has a given time span and sets its aims tangibly… Let's see how the decision to be made in the second Geneva meeting will differ from the first.


Translated from an article by Ömer Taşpinar in Sabah.