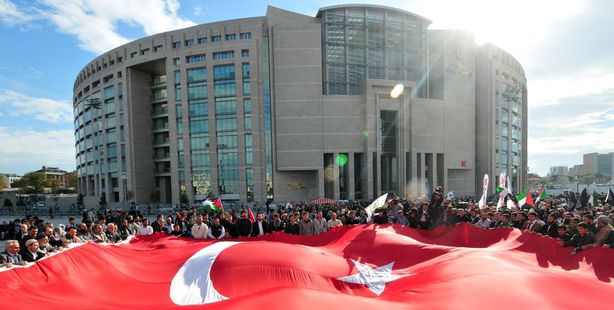 An Istanbul court has requested Turkey’s Foreign Ministry issue a summons to Israel for the four Israeli commander generals who are being charged in Turkey for their involvement in planning and executing the Mavi Marmara raid. Should they refuse to testify in the Turkish court, Interpol may then be brought into play.

There has been a flash development in the trial of four Israeli commanding generals who were involved with ordering and staging the Mavi Marmara raid which took place on May 31, 2010 and resulted in the deaths of nine Turks.

The accused, namely Former Chief of Staff Gabi Ashkenazi, former Navy Chief Eliezer Marom, former Military Intelligence head Amos Yadlin and former Air Force Intelligence Chief Avishai Levy, failed to show up to two hearing's, one held on November 6, 2012 and the other on February 21, 2013, for the trial which has 490 plaintiffs. As a result, it turns out the court has made a request for the Israeli generals attendance in court, which was relayed through the Turkish Republic Justice Ministry International Law and Foreign Relations Department by way of issuing a service of summons.

The Turkish Foreign Ministry worked in conjunction with the Tel Aviv Embassy in order to issue a summons to the four generals which also relayed what charges they faced according to the indictment on the trial opened up by the families of those killed as well as other victims from the raid. Some of the allegations included in the note are as follows: nine counts of aggravated life imprisonment for "instigating a murder with monstrous sentiments and by exerting pain", "instigating property damage", "instigating looting", "instigating suffering," instigating the obstruction of communication", "instigating injury on others," and "instigating shooting someone with a weapon". Combined, a total 18,032 years in prison are being sought for the crimes. Generals Ashkenazi, Marom, Levi and Yadlin have officially been summoned to attend the hearings scheduled for May 20-21 and to testify as suspects.

The Ministry of Foreign Affairs sent a written confirmation that the summons for the four Israeli generals had been delivered to their addresses to the Turkish Republic Justice Ministry International Law and Foreign Relations Department. Along with the written confirmation was a report with proof of receipt that the documents were accepted by the Israeli Foreign Ministry on March 19, 2013.
Interpol may release a red bulletin

The Israeli generals are not expected to actually attend the upcoming hearing. In this case, the court would retain the right to issue a warrant for their arrest, a move which would even lead to Interpol releasing a red bulletin in their names. If it were to get to this level, then due to the fact that the crimes were committed in Turkey and they refuse to show up in court, which makes them a flight risk, according to a European agreement on criminal extradition, Israel and all other Interpol member-nations will be obliged to hand over the suspects.

The following is a translation of an article released in Türkiye Newspaper.