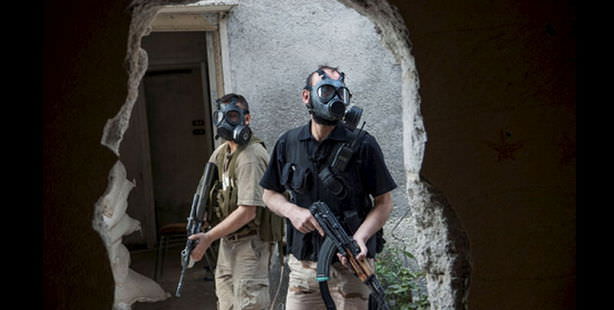 The allegations the Syrian regime is using chemical warfare against the opposition, which have been put forth by Turkey, the United States and Israel, have now been confirmed. Reporters from Le Monde which spent months on the opposition front lines say the weapons are being masked by tear gas to make detection that much harder.

Two reporters for French newspaper Le Monde have bared witness to the use of chemical weapons by the forces under Bashar al-Assad's regime.

An article based on what two reporters who spent two months "clandestinely" in the Damascus area of Jobar alongside Syrian rebels witnessed claims that the Assad regime's forces are using lethal chemical weapons in small bombs that are both odorless and smokeless.

Le Monde journalist reporter Jean-Philippe Remy and photojournalist Laurent van der Stockt spent two months alongside Syrian rebels in Jobar, located on the outskirts of the Syrian capital, where they had the opportunity to conduct dozens of interviews as well as witness first-hand the setting off of small bombs that contained poisonous chemical substances. "Their gravity, their increasing frequency and the tactic of using such arms shows that what is being released is not just tear gas, which is used on all fronts, but products of a different class that are far more toxic," writes Remy noting that Le Monde's photographer suffered serious respiratory problems and blurred vision for four days after being subjected to the substances. According to a source, these chemicals are being camouflaged by the addition of tear gas, which makes it harder to identify the cause of the symptoms.

Omar Haidar, chief of operations of the Tahrir al-Sham ('Liberation of Syria') Brigade described the minute sound these bombs released as being similar to "a Pepsi can that falls to the ground." These chemical weapons contain no odor, no smoke however soon after they hit the ground those within 500-meters of their penetration begin to have excessive burning in their eyes, blurred vision, extreme coughs, respiratory difficulties and sometimes even lose consciousness writes Le Monde. The article claims that in the second half of April the chemical bombs used began to have fatal effects.

Dr. Hassan O. from Al-Fateh de Kafer Battna hospital describes the symptoms of the patients they have been treating. "'The people who arrive have trouble breathing. Their pupils are constricted. Some are vomiting. They've lost their hearing, they cannot speak, and their respiratory muscles have been inert. If we don't give them immediate emergency treatment, death ensues." A doctor from a hospital in Sabha says they saw 150 patients showing such symptoms within a timeframe of two weeks, doctors said they had admitted up to 60 cases from the Otaiba front in a single day and 39 patients were treated after a chemical attack on the town of Adra.

The article states that these weapons are being deployed in critical strongholds held by the opposition. While Syrian soldiers were seen wearing chemical protection suits, the article points out that rebel fighters are trying to stave off the effects by wearing simple gas masks or surgical masks. According to Le Monde, blood samples of the victims have been sent abroad in order to determined the use of chemical weapons.

Le Monde writes that this article and the photos presented verifies the repeated claims by the United States, Turkey and Israel that Assad's regime is using chemical weapons. While the United Nations announced on May 22 they had confirmed information that chemical weapons were being used in Syria, the regime's troops and the opposition laid blame on one another. As for the evidence mentioned up until now the article states, "they have neither disclosed the exact nature of the proof nor decided whether, as President Obama promised in August 2012, the use of such arms by the authorities in Damascus would constitute the crossing of a 'red line' that would lead to a foreign intervention in Syria against the regime."

Forces loyal to Assad have announced one loss due to chemical weapons in Damascus' Haresta region while the Syrian Revolution General Commission (SRGC) has also announced one death and 72 cases of near-suffocation.

This is a translation of an article originally written by Nerih Çatık from Paris.