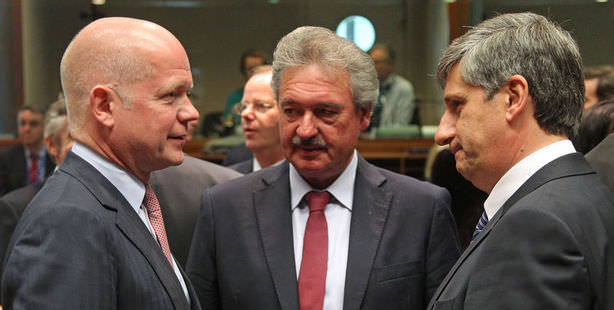 After a marathon negotiating session of EU Foreign Ministers, a ban on arming the Syrian opposition in order to protect the innocent public has in effect been lifted. England’s unyielding stance in favor of the embargo’s expiration was influential in the decision-making process.

During a meeting of EU Foreign Ministers in the Belgium capital of Brussels held on Monday, lengthy attempts to renew an EU arms embargo failed, with Britain and France insisting on having the freedom to supply weapons to Syrian rebels fighting President Bashar al-Assad.

France joined Britain in pushing to allow European governments to deliver arms at Monday's meeting and the deal reached after 12 hours of bargaining in Brussels now leaves the decision to supply weapons to the National Coalition for Syrian Revolutionary and Opposition Forces up to each nation.

London and Paris have argued for months that Europe must send a strong signal of support for rebels fighting Assad by allowing EU arms deliveries, even though they say they have not decided yet to actually supply arms. But they ran into strong opposition from other EU governments, led by Austria and Sweden, which argued that sending more weapons to the region would increase violence and spread instability.

Austrian Foreign Minister Michael Spindelegger opposed the lifting of the arms embargo on the Syrian opposition and said, "We just received the Nobel Peace Prize, and to now go in the direction of intentionally getting involved in a conflict with weapon deliveries, I think that is wrong."

EU sanctions on Syria that will remain in place include asset freezes and travel bans on Assad and senior Syrian officials, as well as curbs on trade, infrastructure projects and the transport sector.

U.S. Secretary of State John Kerry and Russian Foreign Minister Sergei Lavrov met in Paris to discuss the details of the proposed conference in Geneva. No specific plans were released; however the two nations did decide to continue collaborating on the upcoming international summit on Syria.