Suu Kyi comes to defense of Muslims in Myanmar 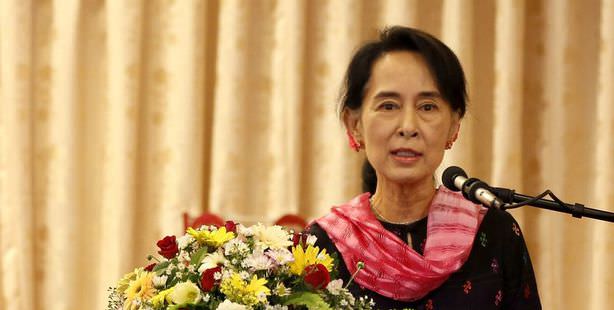 Myanmar opposition leader and pro-democracy champion Aung San Suu Kyi condemned on Monday a policy by a district government to limit Muslim Rohingya families to two children in an effort to curb their population growth, calling it both discrimination and going against human rights.

Myanmar opposition leader Aung San Suu Kyi who was held under house arrest by a junta regime in Myanmar (Burma) for 15 years and was released in 2011, issued harsh criticism of the two children restriction for Rohingya Muslim families residing in the Rhakine state in the west of Myanmar.

Nobel Peace Prize-winner Suu Kyi told journalists "They shouldn't discriminate. This is against human rights," in what was the first time she had commented on behalf of the Rohingya Muslims.

Suu Kyi has been heavily criticized for not speaking up for their rights, even after clashes with Rakhine State Buddhists last year in which at least 192 people were killed and 140,000 made homeless. Most of the victims were Rohingya Muslims and many remain in camps they are not allowed to leave.

An estimated 800,000 Rohingya live in Rakhine State in the west of Myanmar. Many of the Buddhist majority in the country considers them illegal immigrants from Bangladesh and the government refuses to grant them citizenship.

The two-child policy dates back to 1994, but it does not appear to have been enforced until recent weeks. Rakhine officials say the rule is more aimed at ensuring polygamy is limited and therefore states a monogamous family should have just two children.

Rakhine Administration Spokesman Win Myaing states that due to the apprehension the restrictions will result in conflict amongst society, they have refrained from enforcing the policy for years.