The European Parliament’s criticism of Turkey 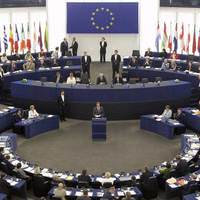 European Parliament members talk of constructively criticizing Turkey, while canceling a projected visit due to the situation caused by protests.

European Parliament international relations members in Brussels, while debating the ongoing tensions in Turkey in the Turkish-EP joint commission, commission president Helen Flautre said, "If we had opened chapters for judicial and fundamental rights alongside justice, freedom and security we would be much more effective and I myself would feel better."

Flautre, who said these words had the support of most of the EP members that participated, also said that since the two chapters were not opened, nor did they have in place guidelines for them, therefore the recommendations the EU could make to Turkey on freedom and fundamental rights would decrease their effectiveness.

Flautre, emphasized that the Regional Politics chapter, who's June 26th opening is a question of debate amongst EU members, would also be important in consideration to Turkey's resolution process.

Flautre, a member of the French Green Party, stated that in this period, instead of weakening ties between the EU and Turkey, there should be attempts to strengthen them while keeping a door open for dialogue.

The European Parliament Committee on Foreign Affairs Chairman Elmar Brok, a German Christian Democrat, stated that due to the decisions last week in the EP, there no longer was a purpose in examining contacting and thus the visit to Turkey has been canceled. Brok, on a telephone call involving the EPCF visit told the Turkish Minister to the EU process Egemen Bağış that "it won't be useful". "We want to support our relationship with Turkey" said Brok, "We are on the side of staying in contact during the current situation and to continue developing from a European perspective."
Last Update: Jun 19, 2013 3:09 pm
RELATED TOPICS