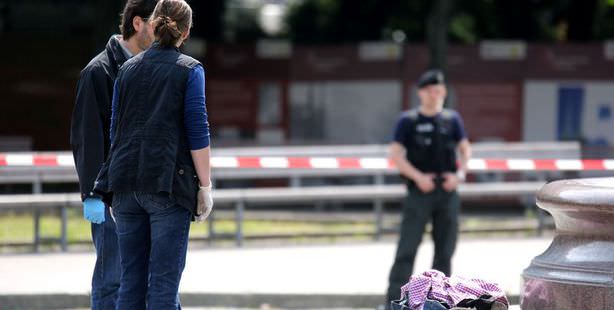 Video footage has been released showing German police shooting dead a naked man wielding a knife who appeared to be not of sane mind. Officers are seen first warning the individual and then later shooting the male suspect at close range when he began to attack an officer with a knife.

Video footage from an eye witness of the incident shows what transpired when German police were forced to shoot down a naked man wielding a knife at a popular fountain in Berlin. Responding to a call, police officers arrived to Neptune Fountain, where they warned a naked man wielding a knife to put the knife down and surrender. The young man, who was acting strangely, then began cutting himself. When a police officer tried to stop the man from causing any more harm, he began wielding the knife against the officer and screaming. Despite the fact that the assailant did not pose a significant threat, the officer shot one round at the assailant from close range. The man took a few steps backwards and is then seen losing his balance and falling to the ground.

A BULLET TO THE LUNG

The shocking footage was captured second by second on a cell phone by a bystander. The young man later passed away as he was being transported to the hospital by ambulance. According to the forensic report, the 31-year-old assailant who lived in Berlin was killed from a bullet to the lung.

Police Spokesman Stefan Redlich explained that they had received calls from people in the vicinity that there was a naked man wielding a knife near the fountain and that the individual was shot by officers when he didn't heed warnings to surrender. While an investigation into the incident ensues, the German public is divided into two factions regarding the excessive use of force by police.