Defiant Morsi to 'defend his legitimacy to death' 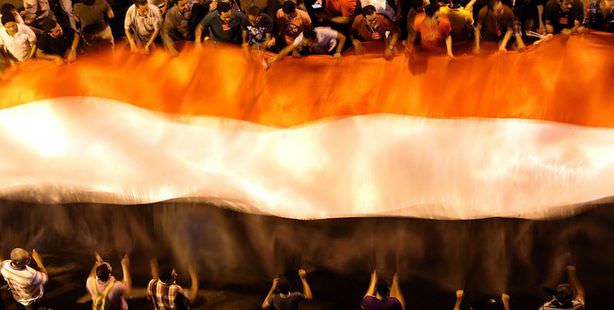 Egypt's President Mohammad Morsi said he accepts a proposal from political parties including the formation of a new national unity government and calls on the army leadership to withdraw its ultimatum and rejects any domestic or foreign dictations.

Egyptian President Mohammad Morsi remained defiant against an army ultimatum as well as calls for his resignation by protesters. In a televised address to the nation early on Wednesday, Morsi reiterated unwavering commitment to his constitutional legitimacy, insisting he would never accept any decision or move by any authority, group or individual to undermine his legitimacy. "I am ready to defend my constitutional legitimacy to the death," he said.

Morsi said he had received an initiative from political parties to form a new national unity government, form a commission to work on constitutional amendments, speed up preparations for parliamentary elections and set up a committee for national reconciliation. He added that the initiative had been conveyed to him through the government and the army, reaffirming his acceptance of the initiative. The Egyptian president said the reaction of the opposition forces to the initiative was "negative". "They refused the initiative," he said, adding that he remained open to implement the initiative if the opposition changed its position, and that he would not accept anything other than that.

President Morsi has asked the army to withdraw the 48-hour ultimatum it had issued for solving the political crisis in the country, his media office said. President Morsi reiterates his commitment to constitutional legitimacy and rejects any attempt to undermine it. The president calls on the army leadership to withdraw its ultimatum and rejects any domestic or foreign dictations," the office said. The army on Monday set a 48-hour deadline for the presidency and the opposition to find a solution to the political crisis in Egypt. The army said it would otherwise announce a roadmap for Egypt's future and supervise its implementation. Hundreds of thousands have taken to the streets to call for early presidential elections. But supporters insist that Morsi, who was elected in June 2012, must complete his four-year term.

Military chiefs issued a call to battle in a statement headlined "The Final Hours". They said they were willing to shed blood against "terrorists, radicals and fools."

Just three hours after Morsi's television appearance last night, the military high command responded with a post on its Facebook page. The post said they, too, were willing to lay down their lives to defend their position - one which they described as defending the Egyptian people from "terrorists, radicals and fools".

A military source said the message came from General Abdel Fattah al-Sisi, the armed forces commander appointed by Morsi last year, who issued the 48-hour ultimatum to politicians on Monday. Military sources told Reuters the army had drafted a plan to sideline Mursi and suspend the constitution after a 5 p.m. deadline passes. Coordinated with political leaders, an interim council would rule pending new elections.

At least seven people were killed and many injured in clashes between supporters and opponents of President Mohammad Morsi in the Giza Governorate on Tuesday.