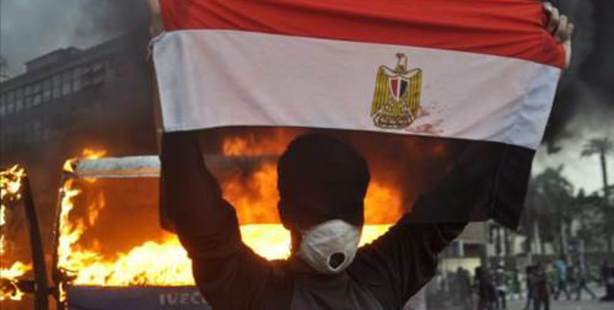 The ongoing upheaval in Tahrir Square and the gang rape of a Dutch journalist in Cairo has spread widespread fear and panic of escalating violence.

The "Baltajis": the word used to describe the armed goons that surfaced in 2011 during Mubarak's ruling.

Over the past week, Mubarak's armed goons, the Baltajis, have not only attacked demonstrating supporters of Egyptian President Mohamed Morsi, but they have also set alight the headquarters and offices of the Freedom and Justice Party, the al-Wasat Party and the Muslim Brotherhood. The Baltajis are also being accused of having gang raped a female Dutch journalist in Egypt.

THEY ATTACKED USING HORSES AND CAMELS

The "Baltajis", which have staged numerous attacks on demonstrators against Mubarak, also attacked protesters in Tahrir Square in 2011, as they rode in on horses and camels.

THEY COME OUT FROM UNDER EVERY STONE

In the period following the revolution in Egypt on January 25, 2011, the Baltajis staged a number of attacks resulting in many people losing their lives. The Baltajis were also said to have been involved in a number of robberies, muggings, looting and rape incidents.

Allegations have surfaced that a number of bureaucrats, businessmen and influential figures from the Mubarak regime are behind the Baltajis who have been attacking protesters taking part in the public uprising.

The Baltajis apprehended in response to attacks in 2011 in Egypt, were then said to have been let off due to the influence of a number of high-ranking members of Mubarak's former party. It is frequently alleged by members of Egypt's opposition liberal, left and secular parties that from time to time, police chiefs from the former regime actually hand over directives themselves to the Baltajis who end up pouncing on areas where demonstrations are being staged.

THE HOMELESS AND ORPHANS MAKE UP GROUP'S MEMBERS

The Baltajis are usually between the ages of 14 to 30, are primarily unemployed and hail from the outskirts of city centers. According to a study, a majority of Baltajis do not have family members and some are even homeless. Known for having criminal inclinations, the use of narcotics and pills is notorious amongst Baltajis. A new police unit will soon be formed to hone in on Baltajis, which tend to operate in small groups announced President Morsi, underlining the fact that these criminal groups pose a threat to everyone.

The word Baltaji, was derived from the Turkish word Baltaci, which refers to someone wielding an axe. While in the past, the term was used to refer to those who took the frontlines in the military, now, the term is widely used in Egypt to denote criminal gangs. Baltaji's generally attack using knives or Molotov cocktails; however it is well-known that there are a few armed members that do attack with gun fire. The Baltajis not only attack protesters, but they have also been looting and setting buildings on.

Perhaps the most significant allegation regarding the Baltajis came from al-Wasat member Essam Sultan who has said, "The former regime in Egypt used 250,000 Baltajis."

Baltaji's have been involved in nearly every case of violence that has transpired since the January revolution in Egypt. Over the past week alone, they have looted and set alight over 50 offices belonging to the Freedom and Justice Party and the Muslim Brotherhood. They have also been attacking protesters, robbing local venues and have been responsible for a number of mugging and rape cases.

As the violence continues to intensify in Egypt and the number of deaths piles up, case after case is coming in pointing to responsibility of the armed criminal group regularly referred to as the Baltajis.