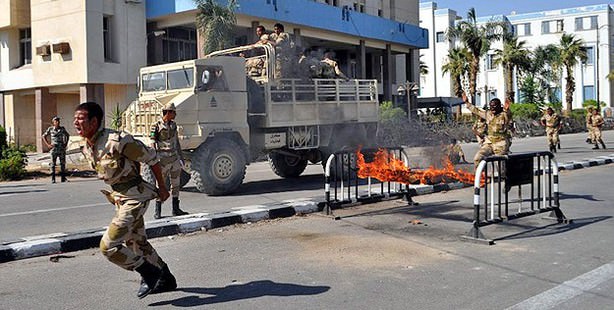 While Turkey has openly condemned the military coup in Egypt, western nations, which attempt to teach lessons of democracy at every turn, remained silent in response to the coup d’état which transpired in Egypt on July 3rd.

Nations such as the United States, Germany and England have refrained from using the term "coup" to qualify what transpired in Egypt on Wednesday in which Egypt's first-ever elected leader Mohamed Morsi was ousted by the Egyptian army. While the United Nations and the European Union referred to what transpired as a "military intervention," Gulf nations went so far as to even send congratulatory messages to the military.

The Egyptian army usurped the civilian administration on Wednesday as the entire world watched after spending days glued to the situation in Egypt in heavy anticipation. As news surfaced that the military had devised a roadmap to hold new elections, including the appointment of an interim president, one by one world leaders began releasing statements regarding the ousting of Egypt's first-ever elected President Mohamed Morsi. However, world leaders appeared to embrace a varied stance when it came to this most recent development in the country in turmoil.

Leaders from the United States, England, France, Germany, Russia and China, avoided using the term "coup" in reference to the developments in Egypt. The United Nations, NATO, the EU and the EC chose to refer to what transpired as a "military intervention" rather than a "coup".

Those who did not support Morsi have been qualifying this latest turn of events as "necessary intervention." According to oppositionists, the military saved the nation from heading towards civil war. Saudi Arabia, the Palestinian Administration and a number of Gulf nations have all delivered messages of support for the Egyptian army.

The first stops in the Arab Spring, Libya and Tunisia, have both announced support for Morsi. Although a number of states and international institutions have refrained from referring to what transpired in Egypt as a "coup" a number of leading press establishments have openly written that Egypt underwent a coup d'etat.

The following are a series of international responses to the situation in Syria:

USA: President Barack Obama, who has been holding continuous emergency meetings with his team in response to the military takeover in Egypt, said the US was "deeply concerned" about the Egyptian military's decision to oust President Mohamed Morsi, suspend the nation's constitution and urges a quick restoration of democracy. Obama avoided referring to the military takeover in Egypt as a "coup d'etat" and instead said, "I now call on the Egyptian military to move quickly and responsibly to return full authority back to a democratically elected civilian government as soon as possible through both an inclusive and transparent process, and to avoid any arbitrary arrests of President Morsi and his supporters. The United States continues to believe firmly that the best foundation for lasting stability in Egypt is a democratic political order with participation from all sides and all political parties -- secular and religious, civilian and military."

UNITED NATIONS: UN Secretary General Ban Ki-moon, stated that military interference in any country is worrying and said, "Therefore, it will be crucial to quickly reinforce civilian rule in accordance with principles of democracy. At this moment of continued high tension and uncertainty in the country, I appeal for calm, non-violence, dialogue and restraint."

ENGLAND: British Foreign Secretary William Hague said: "The United Kingdom does not support military intervention as a way to resolve disputes in a democratic system. The chance of a democratic future was hard won for Egypt by the Egyptian people two and a half years ago. But looking forward, we call on all parties to show the leadership and vision needed to restore and renew Egypt's democratic transition. It is vital for them to respond to the strong desire of the Egyptian people for faster economic and political progress for their country."

EUROPEAN UNION: Uncomfortable with certain nations refraining from referring to the incident as a coup, Sweden's Foreign Minister Carl Bildt said the European Union (EU) needed to make a clear statement on the military coup in Egypt. "The EU needs to make a clear statement and consultations should continue. Egypt must seek a solution based on inclusive democratic dialogue between all. Everyone must respect democratic principles and the constitutional order of Egypt and a solution must be sought within this framework."

CHINA: China called for dialogue and consultation as well as avoidance of violence to solve the crisis in the country. Stating that China was closely following the incidents in Egypt, the Foreign Ministry urged "respect to the will of Egyptian people."

SAUDI ARABIA: Saudi King Abd al Aziz greeted Egypt's Chief of General Staff Abd al Fatah as Sisi and sent a congratulatory message to Adly Mansour, the head of the constitutional court, who was announced as interim president by the army. "We congratulate the Egyptian army which took the country out of this uncertain tunnel," said the king.

GERMANY: German Foreign Minister Guido Westerwelle stated in a press release that the recent incidents in Egypt were "a serious setback" for Egyptian democracy and called Egypt to return immediately to its constitutional order.

RUSSIA: Russian Foreign Ministry said in a statement that the country was closely following the incidents in Egypt, adding that the two countries had strong historical relations. The statement said Russia had supported efforts for "a more democratic and independent life since the very beginning when profound changes started in the Middle East and said that they maintain this position in principle."

UNITED ARAB EMIRATES: The United Arab Emirates (UAE) is among the countries that backed the army up for ending the unrest in the country. "The supreme Egyptian army proved that it was a protector and shield for Egypt," said UAE Foreign Minister Abdallah bin Zayid Al Nuhayyan, adding he felt "complete relief."

ARAP LEAGUE: Secretary-General of the Arab League Dr. Nabil Al-Araby on Thursday congratulated Adly Mansour for being appointed as interim president and offered his greetings to the Egyptian army for this "historic achievement which aims to overcome the crisis and chaos experienced by the country over the last period".

NATO: Secretary-General Anders Fogh Rasmussen stated, "It is of key importance that we find a solution that will pave the way for restrengthening the Egyptian democracy within the shortest time possible.