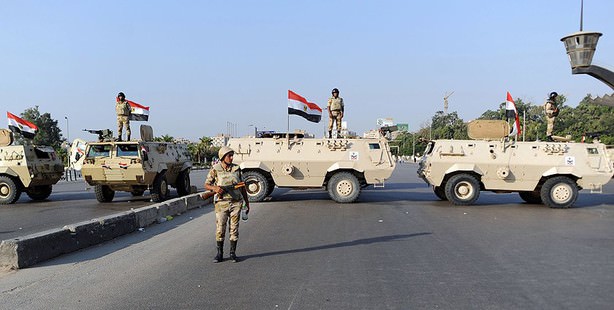 While world nations continue to refrain from referring to what has transpired in Egypt as a coup, during yesterday’s meeting of the 54-nation member African Union the decision was made to suspend Egypt’s membership until the country is able to return to a constitutional order.

After last Wednesday's coup in Egypt in which General Sisi's army ousted Egypt's first legitimately elected president Mohamed Morsi, the African Union has officially issued the most significant sanction on Egypt by suspending its membership due to the lack of constitutional rule due to the military takeover.

During the 54-nation member organization's meeting on Friday, the decision was reached to put Egypt's membership on hold. The AU said the suspension is the union's usual response to any interruption of constitutional rule by a member state. During the meeting held in the Ethiopian capital of Addis Ababa, members condemned the ousting of Mohamed Morsi and emphasized that what is taking place in Egypt is General Sisi's coup. Members took to a vote with the results showing that the union had decided to suspend Egypt's membership until constitutional order has been restored. "As mandated by the relevant AU instruments, the African Union Peace and Security Council decides to suspend the participation of Egypt in AU activities until the restoration of constitutional order," Admore Kambudzi, Secretary of the Peace and Security Council, said.

Meanwhile, Middle East correspondent Robert Fisk writes in an article released in Britain's the Independent, "For the first time in the history of the world, a coup is not a coup. The army take over, depose and imprison the democratically elected president, suspend the constitution, arrest the usual suspects, close down television stations and mass their armour in the streets of the capital. But the word 'coup' does not – and cannot – cross the lips of the Blessed Barack Obama."

UN High Commissioner for Human Rights Navi Pillay said on Friday she was concerned by reports of the detention of leading members of Egypt's Muslim Brotherhood. "I hope that the rule of law and a system of government that respects the human rights of all Egyptians - men and women - can be quickly re-established," she said in a statement.