Fire opened on the public, 30 dead 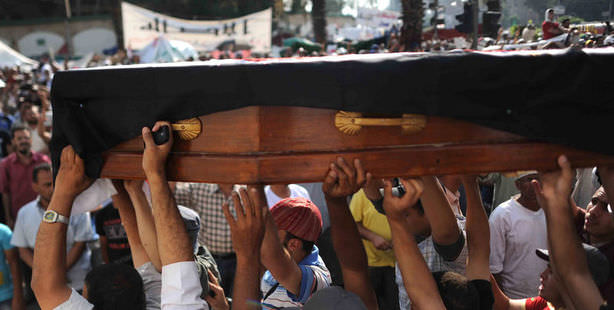 Yesterday, Egypt experienced a day of escalated tension. Morsi supporters came out in a show of resistance to the coup and 30 people died in confrontations that emerged throughout the country.

Following the military's removal of Morsi, the first democratically elected president in Egyptian history, millions took to the streets to organize protests staged against the coup. In the confrontations that occurred across the country 30 died and 400 were injured. The protests in Egypt gained momentum after a speech following the Friday prayer was made by the current leader of the Muslim Brotherhood, Bedii who made statements along the lines of "We shall not abandon the city squares." The Egyptian military that handed out flowers to the protestors supporting the coup in Tahrir responded with bullets directed at Morsi's supporters. Fire was opened on Morsi supporters that attempted to march on the headquarters of the Republican Guard; reportedly at least 4 were killed in this incident.

As the night progressed, there were confrontations recorded on the roads leading to Tahrir Square. Some protesters opted to protest in front of the Government's Television headquarters. Protesters withdrew however after the military response. Another group gathered in front of the Presidential Palace. Also a separate group of resistors marched to where the defense minister is being held under house arrest. Reuters spread the news that the shots fired at the Morsi supporters had stopped. During conflict on the Sixth of October Bridge one casualty was suffered. Two people lost their lives in the city of Asyut, where a confrontation between Morsi supporters and the military ensued in front of the city municipality building. In other confrontations a total of 23 people died, 12 of which were in Alexandria. It was reported that in Sinai a military helicopter bombarded areas near the El Arish Airport.

Bedii: We will resist till Morsi returns

The Guidance Council President of the Muslim Brotherhood, Muhammed Bedii, stated in a speech he gave from Cairo's Rabiatu'l-Adeviye Square, "Millions shall stand resisting in the city squares until Morsi returns. We shall sacrifice our lives for this. Neither arrests nor the gallows can make us give up. Egypt shall not give in to military rule."

Hayrat Shatir and the leader of the Nur Party were arrested, while warrants were also issued for Bedii and 3 other Ihwan leaders would also be detained. 35 other leaders were given bans on international travel. The leader of the Freedom and Justice Party, Saad el-Katani and the manager of the Muslim Brotherhood, Rashad el-Beyyumi were released from custody.