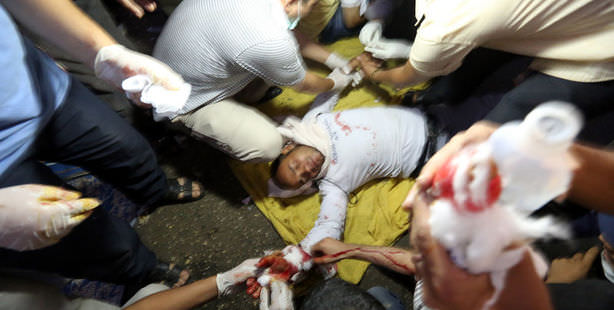 Fire was opened on pro-Morsi protesters in front of the Republican Guards Headquarters in Cairo on Monday.

Fire opened by the military on pro-Morsi protesters on Monday killed 53 people and injured more than 300 others in front of the Republican Guard Headquarters in Cairo.

The Muslim Brotherhood said at least 53 people, including five children, were killed outside the Republican Guards headquarters in the early hours of Monday.

The Egyptian Ambulance Authority (EAO) said earlier that 42 people were killed and 322 wounded outside the Republican Guards HQ, expecting the death toll to rise.

Muhammad al-Baltaji who hails from the Muslim Brotherhood said, "While people were performing the morning prayers in front of the Republican Guards Headquarters, security forces first began throwing tear gas bombs and then opened fire on protesters."

The Egyptian army has announced that a commander was killed and nearly 40 soldiers were wounded in clashes between protesters and army forces when protesters attempted to raid the Republican Guards Headquarters.

The death toll in Egypt is fast on the rise. As of Friday, 90 people had been killed since the start of the uprising the Sunday prior. With Monday's deaths as well as the toll over the weekend, the situation in Egypt is becoming increasingly dire.