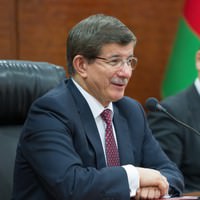 Speaking at a fast breaking dinner hosted by Independent Industrialists' and Businessmen's Association (MUSIAD), Chamber of Industry, Chamber of Trade, Commodity Exchange in his hometown Konya, Davutoğlu evaluated the latest tension in Ceylanpinar district of Sanliurfa province at Syrian border.

Regarding a Turkish national who was killed in Turkey's Cerylanpinar border town Wednesday when hit by a stray bullet fired from Syria's Ras Al-Ayn, Davutoğlu said, "This is a striking picture that shows to what extent the crisis in Syria could affect us and our citizens. We once again call on the international community, immediately and fastly, if the United Nations Security Council (UNSC) would meet the case of being UNSC, this is the only time to do that."

He added, "Time to say stop to the massacre in Syria had passed long ago. Otherwise, the international community would lose its meaning, first and foremost the UNSC."

Touching upon the solution process, Davutoğlu said Turkey had prepared itself for, what might be the most peaceful Ramadan and summer. Therefore, he said, at such positive time period, certain circles wanted to push Turkey into a turbulence in May, referring to Gezi Park events.

"International media executed a campaign to create an impression that our decade-long successful economy and unshakable political stability, and moreover our strengthened unity was heading towards a chaos," said Davutoğlu.

Davutoğlu further emphasized that nobody should attempt to break the bonds by misusing Turkey's tolerance and through acts of vandalism, trying to destroy Turkey's image that has been built working day and night by the prime minister, president and all of the high state officials.

Davutoğlu reminded that two years ago in the same iftar organization, the topic was Somalia, while at last year's it was Myanmar, and said Turkey undertook serious responsibilities in both countries, being first to dress their wound.

"This year our hearts beat with our Syrian and Egyptian brothers," reminding that he, with his family, broke fast in the first day of Ramadan in the Nizip container city in Gaziantep, southern province of Turkey on the Syrian border.

"Now we break our fast at this high conditions, while Homs is under bombing. How could we bear this, how could be remain silent, leave our Syrian brothers alone? They know that their Turkish brothers are by their side, and will continue siding with them. Let those who are not, feel ashamed. We feel in peace as we fulfil our historical duty," said Davutoğlu.

Support to "elected" in Egypt

"We, in line with our principles, only side with elected people, regardless of their opinion, party or origin," referring to the developments in Egypt.