“End the Coup” rally in Adawiyah 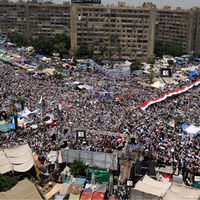 by Jul 20, 2013 12:00 am
To protest the coup that saw the first ever democratically elected Egyptian President, Muhammad Morsi, over thrown, two simultaneous protests were organized in the Adawiyah and Nahda squares in the Egyptian capital of Cairo, these protests were called the "End the Coup" rallies. The protesters came from different political parties, joining the protests under the name of legitimacy after being called to do so by the National Unity Platform, the organization that organized the "Rally of Millions". Protesters of different backgrounds and beliefs from Giza and Cairo flooded to the Adawiyah and Nahda squares