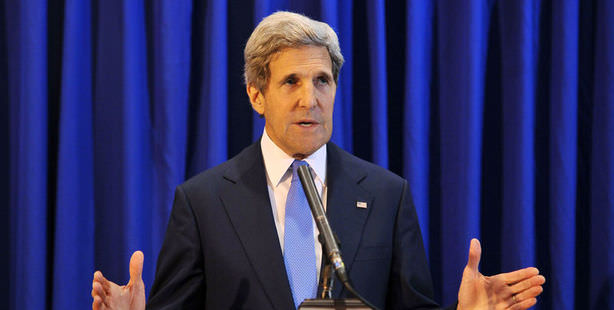 United States Secretary of State John Kerry announced on Friday that Israel and Palestine have reached a new agreement, which is in the process of being formalized, to resume peace negotiations after a hiatus of nearly three years.

U.S. Secretary of State John Kerry has paid six visits to the Middle East since March as part of ongoing efforts to restart peace talks between Israel and Palestine. On Friday, following a meeting with Palestinian President Mahmoud Abbas in Ramallah, Kerry announced from Jordan that an agreement has been reached to resume peace negotiations.

"We have reached an agreement that establishes a basis for resuming direct final status negotiations between the Palestinians and the Israelis, "Kerry said during a press conference at an airport in the Jordanian capital of Amman, while also adding, "The agreement is still in the process of being formalized."

Although Kerry announced the agreement to resume peace talks, the U.S. Secretary of State refrained from sharing any further details and said the sides would be sitting down to the table in Washington next week. Kerry added that sharing any further details would only be resorting to "speculation" and said that keeping the details confidential would allow the negotiations between the sides to be more effective.

Pointing out that although the agreement reached following days of bilateral talks with Israeli Prime Minister Benjamin Netanyahu and Palestinian President Mahmoud Abbas was an important step for Israeli-Palestinian relations, America's top diplomat also thanked the Arab League for the support offered for peace talks to resume.

Palestinian Chief Negotiator Saeb Erkat and his Israeli counterpart Tzipi Livni will be arriving to Washington next week to begin negotiations.