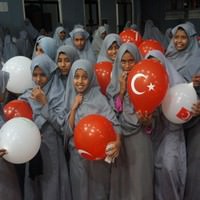 Turkish charity organization "Sadaka Tasi" has built an orphanage for 75 children in Colombo, largest city of Sri Lanka on the westcoast.

Participating in the opening ceremony of the "Hatice-i Kubra" Orphanage, the associations's members gifted computers, projecters, Qur'an and several religious books to the orphanage.

After that the members participated in mosque and school openings, followed by iftar meal given by the association.