“The Kurds should not be left out of the opposition” 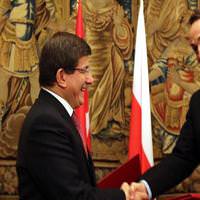 Foreign Minister Ahmet Davutoğlu addressed the questions of the press after he returned to Turkey following his talks in Poland.

Foreign Minister Ahmet Davutoğlu addressed the questions of the press after he returned to Turkey following his talks in Poland. This is how Davutoğlu evaluated the developments in Syria" "We expect 3 basic things from the Kurds in Syria. Firstly for them not to cooperate with the regime. Because they are living through tensions with the Arabs. The second is for them not to form a de-facto foundation based on ethnic or religious bases. Our intention is not for the Kurds not to attain status. The Syrians themselves will decide the government structure that they desire with elections. The third is for them not to engage in activities that could endanger the security of the Turkish border. Turkey will not take and not give to any group. In-fact in recent times we made some serious decision on how we can help with humanitarian aid during the Kurdish Issue. Davutoğlu went on to say that the PYD's statement of autonomy would lead to civil war, "We do not want the Kurds in Syria outside of the opposition. We want them to take their rightful place within the opposition as soon as possible. A conflict like the one in Iraq where Sunni Arabs and Kurds as well as Turkmens and Kurds are in existence. After all this is the game the regime plays. The offer to give the Kurds that they didn't even grant citizenship to Autonomy" said Davutoğlu. Davutoğlu stated for the record that groups like El Nusra should fight under the same rood as the opposition.
MÜSLİM: THE ADMINISTRATION WILL TEMPORARY


The President of the Democratic Unity Party (PYD), Salih Müslim, stated that the government that they founded is a temporary one to withstand during the duration of the Syrian conflict, and that intention is not to divide Syria. Organizing a press conference in Erbil, PYD President Müslim said: "Some say "a state is being founded" no we are not founding a state, some say were are fracturing, no we are not fracturing. What we want is to found a temporary serving administration till the chaos in Syria is over. " Müslim stated that the parliament will be founded from 5 members of each ethnic group and political party that recognizes the management, and this commission will then go on to elect the president to take local control. On the other hand, a group of around 100 people escaping the conflicts in the Rasulayn region came to the Turkish border, from where they were taken to the Telhamut tent city.

Translated from an article by YAHYA BOSTAN on SABAH