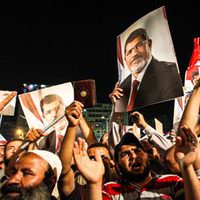 The death toll from Saturday's dawn massacre against the supporters of ousted President Mohamed Morsi and security forces in Cairo's Rabaa al-Adawiya Square has risen to 72, according to the Egyptian Health Ministry.

The death toll from Saturday's dawn massacre against the supporters of ousted President Mohamed Morsi and security forces in Cairo's Rabaa al-Adawiya Square has risen to 72.

Security forces, for their part, deny having used live ammunition against demonstrators, insisting they only used teargas to disperse the crowds.

The fatalities came shortly after tens of thousands of Egyptians took to the streets on Friday to support a call by army chief and Defense Minister Gen Abdel-Fattah al-Sisi to provide the army and police with a "popular mandate" to "confront violence."

Tens of thousands of Morsi supporters also staged mass rallies on Friday to demand the reinstatement of the ousted president.

Morsi, Egypt's first democratically elected head of state, was deposed by the army on July 3 after mass demonstrations against his regime.

Since then, his supporters have been staging daily protests and sit-ins to denounce the military coup against the elected president.

Many of them have remained camped out in Rabaa al-Adawiya Square in Cairo and Nahda Square in Giza.