The flaws in the New York Times 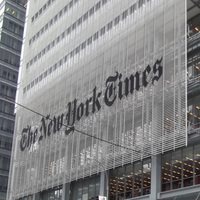 Before the calming atmosphere of Ramadan took hold of Turkey, the tensions from last June’s Gezi Park protests were still in the air.

Before the calming atmosphere of Ramadan took hold of Turkey, the tensions from last June's Gezi Park protests were still in the air. Last June, Istanbul was the stage for theatrics, where masked actors played their parts, utilizing the western and social media outlets to gain their audience. These actors with sinister intents sang their harpy ballads to the welcoming ears of the western media, as outlets, most notably CNN falling for their rouse. Among other's that fell for the masquerade trap was the New York Times, which aired a full page ad, paid for by the donations of these actors themselves. The fallacious contents of the ad are laughable, and from a factual perspective exaggerated and distorted as best.

The afore mentioned advertisement starts off laughably claiming that the protests were of a peaceful nature, though this might be true to a very limited extent, protests in which participants hurled a variety of projectiles at police officers; among which were rebar stripped from local construction sites, cobblestones from surrounding sidewalks, and even Molotov cocktails and petrol bombs were hardly of the peaceful nature. The very use of such objects against officers of the laws in a city like New York would undoubtedly cause unprecedented upheaval within the United States, and a media outlet with the prestigious standing of the Times would come under unimaginable fire for airing such claims. The shows of "peaceful protesting" did not stop there, as these actors turned their anger on public and private property, as tax paid public busses, bus stops, and local stores saw the brunt of the "peaceful" vandalism, as they laid in ruin throughout Taksim, as well as the roads that led up to the square. Even a news van belonging to the FOX news media outlet, which proved to one of the actors' greatest supporters throughout this period fell to their unforgiving hands.

The fallacious claims do not stop there, the following paragraph claims that the course that Turkey has taken under Prime Minister Erdoğan has been one of continually limited freedoms. Claims that minorities, women, and the media have come under fire alongside various other rights which they untruthfully claim have become denied to them during the 10 year period that in all actuality has seen towards greater democratization in the country.

Prime Minister Erdoğan's time in power allowed for such actions as the removal of the headscarf ban, which saw rights denied to thousands of women for over 80 years once again given to them, the Resolution Process, which promises to finally draw the curtains on 30 years of bloody confrontational history, and last but not least the removal of the ban on the Kurdish language. They claim that the new regulations on abortion and alcohol sales, that still remain less binding than the ones in place in the United States, which they fallaciously refer to as bans restrict their freedoms. The lack freedom of press which they whole heartedly preach was put to the test during this process, and thus their claims were falsified. One of their local media outlets, HALK TV, went as far as urging protesters to assume the clothing of police officers and take to the streets impersonating them, this of course being a federal crime carrying a punishment of 5-10 years within the US. They drew their claims of media censorship on the basis of journalists that were involved and incarcerated for their roles in the "Operation Sledgehammer" plot that sought to cause a 5th military coup in Turkey, though staying true to their roles, making sure no mention of this was ever made. As Prime Minister Erdoğan so truthfully put it, "What sort of incarceration is this that they can comfortably make these sorts of broadcasts?"

Later in the ad, among their demands they state that they demand an end to police brutality, though what of their merciless assaults upon the very same police officers, leaving one dead, two stabbed, and nearly a thousand injured? They demand a free media, when their media outlets are even allowed to broadcast calls for federal crimes? They demand an open democratic dialogue, when the truth of the matter is that they were given an audience with the Prime Minister, the outcome of which saw environmental groups retract their complaints and withdraw from the protests, an audience which they attended with blind eyes and deaf ears. They demand an investigation on the government's "abuse of power", while not taking into consideration the facts that show that this government has been constantly further democratizing the laws and legislations of the country, put in place by a fascist military coup constitution.

How could the New York Times, in all of its greatness, an outlet that has time and time again maintained its place among the world's greatest, have published such a fallacious and fictitious advertisement on a whole page of its paper? How could they have fallen to the harpy ballad of these actors, without taking upon themselves their duty to investigate the facts of the matter when concerning such a large issue?
Has the Times lost sight of their position? Have they lost sight of the factual journalism that brought them respectfully and prestigiously to where they until these events? Has the Times lost its grace?