Davutoglu hints for a Free Trade Agreement with Mexico 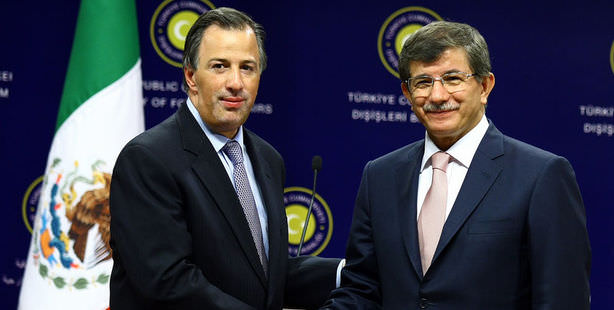 In a joint press conference with his Mexican counterpart Jose Antonio Meade Kuribrena in Ankara on Tuesday, Davutoğlu said, "Turkey and Mexico resemble each other in many aspects despite the distance".

Davutoğlu highlighted the importance of economic relations between Turkey and Mexico which could resemble recent efforts for a Free Trade Agreement between US and EU.

Noting that bilateral relations between Turkey and Mexico have been improving, Davutoğlu said, next year "we will be celebrating the 150th year of our relations with Mexico."

Davutoğlu said "we reviewed bilateral relations and took important decisions. Firstly, Turkey will have a historical visit on the 2nd-4th of September. We will be hosting Mexican President Enrique Peña Nieto in Turkey".

"Therefore, we will work to avoid the double taxation and on investment incentives before Nieto's visit to Turkey," said Davutoğlu.

Mentioning a joint declaration, called the "Strategic Partnership in 21st Century", Davutoğlu said, they would approve the declaration between Turkey and Mexico during Nieto's visit.

Indicating that they discussed the topic of direct flights between Turkey and Mexico with Turkish Airlines (THY), Davutoğlu added, recently Turkey inaugurated five new embassies in Latin America.

Reminding about the 2012 G-20 Summit which Mexico chaired, Davutoğlu said that Turkey will chair the G-20 Summit in 2015 "and we want to benefit from Mexico's experiences."

Regarding economic relations, Kuribrena said "l believe we should work together to achieve growth".

"Our trade volume is 1 billion USD, but l believe the countries like Mexico and Turkey should have extensive economic relations," said Kuribrena.

Kuribrena emphasizing that no Mexican president has yet paid a formal visit to Turkey but the visit of Mexican President will be the first and "we will celebrate the 150th year of bilateral relations."

"Turkey is very active and dynamic country in its region as we are in very strong and important position in our continent," Kuribrena added.

Both Turkey and Mexico are seeking to establish a Free Trade Agreement before the end of 2013.