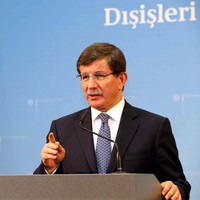 Davutoğlu's call comes a week after high-ranking officials from Turkey's political and security circles met two visiting Kurdish politicians from neighboring countries, one from Syria and the other from Iraq.

Turkey is both "concerned" and "ready to contribute positively" to recent events in Iraq and Syria, Davutoğlu said in a televised program on Friday.

"Turkey has never supported an ethnic group over another in any of its neighbours, especially during the current tumultuous events in Iraq and Syria," he said.

Leader of the Democratic Union Party (PYD), Salih Müslim, met with Turkish officials last week in meetings thought to have helped allay some of the concerns Turkey had regarding the group, which allegedly intends to declare autonomy in northern Syria, close to its border with Turkey.

PYD and the al-Qaeda-linked Sunni al-Nusra Front became embroiled in clashes last month in Syrian border town Ras al-Ayn, which is regarded as a struggle for control over the northern region.

When asked on Turkey's stance towards al-Nusra, Davutoğlu said the Sunni group or any other faction in Syria does not receive support from Turkey.

"There are two formations in Syria that Turkey supports. One is the SNC, of which al-Nusra is not a member. The other is the Free Syrian Army, led by Salim Idriss and recognized by Turkey, Friends of Syria and international actors."

"There are no other opposition groups Turkey or the international community accepts as an opposition party."

- No group in Syria a 'threat'

According to the Turkish minister, "northern Syria" has become a misnomer for a homogenous Kurdish population, whereas the reality is there is no homogeneity, Davutoğlu said, with diverse ethnic groups and sects living in the region.

"We will take a stance against whoever tries to pressure another with ethnic nationalism," Davutoğlu said, which is the reason why Turkey has been wary of PYD.

The recent meetings with the PYD leader were not about the clashes in Ras al-Ayn, Davutoğlu said. Rather, he said they were about an earlier initiative in April complementary to Turkey's "peace process", aimed at ending terrorism perpetrated by Kurdish separatist group PKK that has killed 40.000 people in the last thirty years.

"We don't see any group within Syria as a threat," Davutoğlu said, adding fear-mongering was a problem in Turk-Kurd and Kurd-Arab relations.

"Our main goal is a new order in the Middle East, which will keep Turks, Kurds, and Arabs united against such provocations."