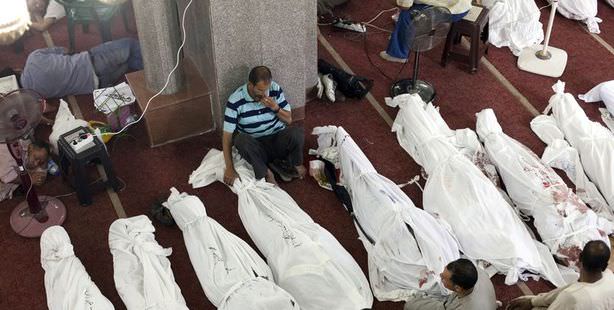 "It is clearly observed that international community's support to the coup and its reticence on the previous massacres, rather than protecting the democracy and constitutional legitimacy in Egypt have encouraged the existing administration on today's intervention. The international community, primarily the UN Security Council and the Arab League should take immediate action to stop this massacre." Erdogan said.

The meeting -- which would be closed-door consultations -- could take place later in the day, they said.
The request comes one day after a bloody crackdown by Egyptian security forces on protesters backing the deposed Islamist president Mohamed Morsi, which left more than 500 people dead.

France, Britain and Australia are three of the 15 countries currently sitting on the Security Council. France and Britain are permanent members.

One diplomat said that the joint request had been submitted to Argentina, which currently presides over the council. The diplomat added that a Council statement was not likely.

EU stance will be more clear on Monday

Senior European Union diplomats will meet in Brussels on Monday to assess the situation in Egypt
and possible EU action, a spokesman for EU foreign policy chief Catherine Ashton said on Thursday.

The diplomats will discuss convening EU foreign ministers, but no decision on when the ministers would meet has been taken. "In the meantime, the High Representative (Ashton) is in touch with colleagues from the EU and international community," the spokesman said.