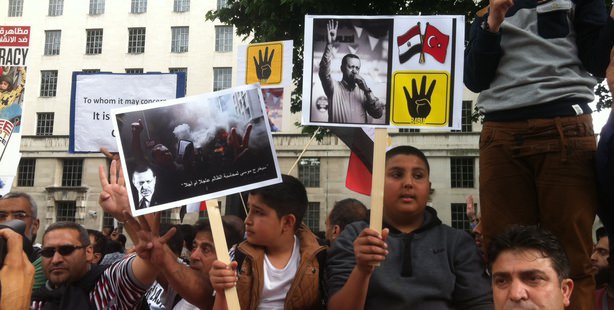 Turkish Prime Minister Recep Tayyip Erdoğan’s condemnation of the military coup by Egyptian generals drew praise from activists in London, who staged a demonstration Sunday in front of Number 10.

Hundreds of protestors in front of the British Prime Minister's Office at Downing Street, carried placards featuring Erdoğan doing the hand gesture that has come to represent the anti-coup demonstrators at Cairo's Rabaa square.

Shawkat Ali, an activist originally from Kashmir, said he was protesting the ongoing massacre and killings in Egypt and described the situation as terrifying.

"We're here in Downing Street to show our resentment to our PM. He should have taken a positive role, like condemning and stopping the massacre in Egypt," he added.

On Saturday Foreign Secretary William Hague called for an end to violence and a return to dialogue in Egypt and condemned "all acts of violence." The foreign secretary also talked to his Turkish counterpart Ahmet Davutoğlu on the phone the same day about the deteriorating situation in Egypt.

Turkey has emerged as one of the fiercest critics of the July 3 ouster of Morsi by the powerful Egyptian military. Ankara has described last Wednesday's violent crackdown on two major anti-coup sit-ins in Cairo's Rabaa and Giza's Nahda squares as a "massacre".

One of the demonstrators who was carrying Turkish PM's photo praised his stance towards the Egyptian regime and thanked him for his support for the people of Egypt. "PM Erdogan stands for democracy and justice. He is the one speaks the truth. He is my man" Khalid Al Turki, a Lebanese-British activist said.