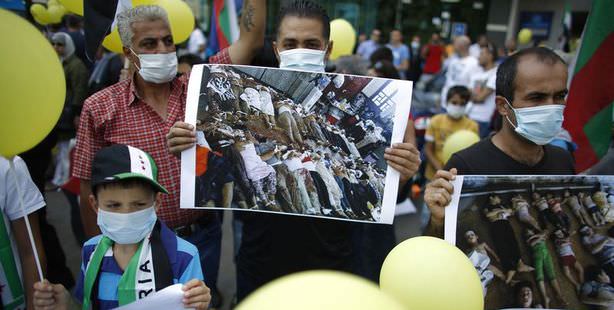 Anadolu Agency (AA) reached detailed list including information about the chemical attack as well as the names of Syrian army troops who were on duty during the attack in Damascus.

Turkish state run Anadolu Agency (AA) reached detailed list including information about the chemical attack as well as the names of Syrian army troops who were on duty during the attack in Damascus.

According to the list of names of the Syrian regime troops who participated in the chemical attack, 155th Missile Brigade: 51, 52, 577, 578, 579 and 1097th Missile Row and technical support row to support them were resposible for the chemical attack. The sources told similar list has been sent to Turkish intelligence agencies.

The attack directly organized by Syrian regime forces was done on 21 August, 2013 at 02.45 a.m. targeting Zamelka, Douma-Harasta regions in East and West Ghouta.

The chemical weapon attacks by Assad regime were carried out by two separate centers simultaneously.

The attack was carried out with about 15-20 chemical warheads missile-rockets by the troops between 155th Missile Brigade in Qutayfa, 35 km to the north of Damascus and 4th Armored Division in Qasyoun Mountain. In the attack in Qutayfa, it is estimated that the regime used the missiles of FROG-7/Luna and/or M600. In Qasyoun, 220 mm rockets with 15-70 km-range were estimated to be used in the attack.