NATO Chief: "We stand in strong solidarity with Turkey" 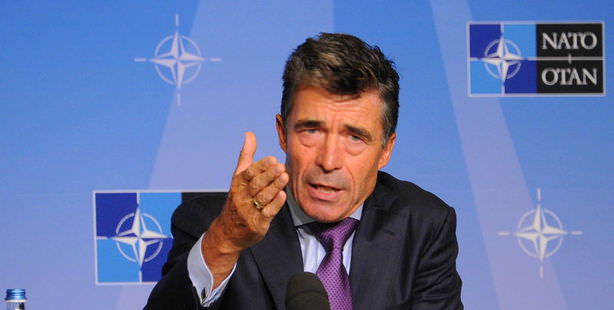 NATO Secretary General Rasmussen said, "We continue to stand in strong solidarity with our ally Turkey. And we remain determined to protect the Alliance’s south-eastern border."

Speaking at a monthly press conference, NATO Secretary General Anders Fogh Rasmussen said on Monday, "NATO's position is clear (on Syria). The chemical weapons attack that took place on August 21 around Damascus was appalling and inexcusable. I have been presented with concrete information and, without going into details, I can tell you that personally I am convinced, not only that a chemical attack has taken place ..., but I am also convinced that the Syrian regime is responsible."

Rasmussen stated that NATO was playing its part in the crisis, and added, "We continue to stand in strong solidarity with our ally Turkey. And we remain determined to protect the Alliance's south-eastern border."Rasmussen said there was "agreement that we need a firm international response in order to avoid that chemical attacks take place in the future. It would send, I would say, a dangerous signal to dictators all over the world if we stand idly by and don't react." But Rasmussen said he saw no further role for NATO in the Syria crisis, beyond defending Turkey.

He emphasized that there was need to develop effective and modern capabilities as Europe needed effective and modern defense industries. "This is a vital part of Europe's ability to ensure its future security. So it is very timely that the European Council at the end of this year will address the issue. And I trust that it will make the defense industry in Europe stronger, more sustainable, and more streamlined."