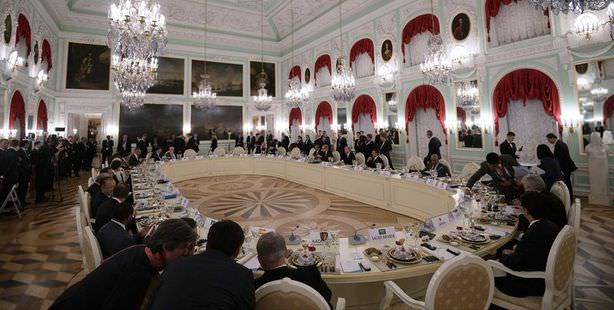 Eleven nations at the G-20 summit in Russia signed a statement on Friday condemning the Aug. 21 chemical weapons attack in Syria and calling for a strong international response.

Eleven nations condemned the Aug. 21 chemical weapons attack in Syria and called for a strong international response on Friday on the final day of the G-20 summit St. Petersburg, Russia, according to a statement issued by the White House. The statement, which stopped short of calling for a military response, was signed by the leaders and representatives of Turkey, Australia, Canada, France, Italy, Japan, South Korea, Saudi Arabia, Spain, Britain and the United States.

"The evidence clearly points to the Syrian government being responsible for the attack, which is part of a pattern of chemical weapons use by the regime," said the statement, released as the G20 summit was ending.

"We call for a strong international response to this grave violation of the world's rules and conscience that will send a clear message that this kind of atrocity can never be repeated. Those who perpetrated these crimes must be held accountable," it said.