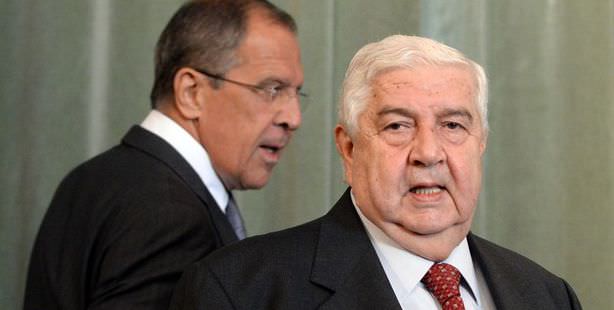 Syria has agreed to a Russian proposal to place its chemical arms stockpile under international control to avoid possible U.S. military intervention.

Syrian Foreign Minister Walid Muallem announced on Tuesday that the Syrian government has accepted a Russian proposal to hand over its chemical arms stockpile to international control. Foreign Minister Muallem stated that he agreed to the proposal after meeting with his Russian counterpart Sergei Lavrov on Monday. Explaining that after "a round of fruitful negotiations", Lavrov came forward with an initiative on chemical weapons, Muallem said that they agreed to the proposal in order to halt potential U.S. military action.

Russian Foreign Minister Sergei Lavrov stated on Tuesday that Russia had prepared a 'roadmap' for putting chemical weapons in Syria under international control. Delivering a speech after his meeting with Libyan counterpart Muhammad Abdelaziz in the Russian capital Moscow, Lavrov said the Russian Foreign Ministry was in touch with the Assad regime and had prepared a 'roadmap.'

"We, the Russian side, are at the present time working on preparing an effective, clear, concrete plan, for which purpose contacts with the Syrian side are being conducted literally at this minute," Lavrov said. "We hope to present this plan in the very near future, and will be prepared to finalize it and work it out with the involvement of all parties, including the US. We are in touch with US Foreign Secretary John Kerry, to whom we spoke on the phone with yesterday," Lavrov added. He also noted that the offer for the handover would not mean revoking UN investigations in Syria.

The US Senate has postponed a procedural vote, originally scheduled for September 11, on a proposal to authorize the use of military force in strikes against the regime of Bashar Al-Assad in Syria.

"What we need to do is make sure the president has the opportunity to speak to all 100 senators and all 300 million American people before we do this," Senate Majority Leader Democrat Harry Reid expressed in his statement on the issue. Indicating that it would not be suitable for the Senate to continue with the procedural vote amid ongoing "international discussions" regarding chemical weapons use in Syria, Reid noted that what was important was how well the vote was embarked upon, rather than how quickly.

The two houses of the US Congress began the legislative year on Monday with Syria on the agenda amid President Barack Obama's endeavor to be granted authorization to use military force against the regime in Syria.