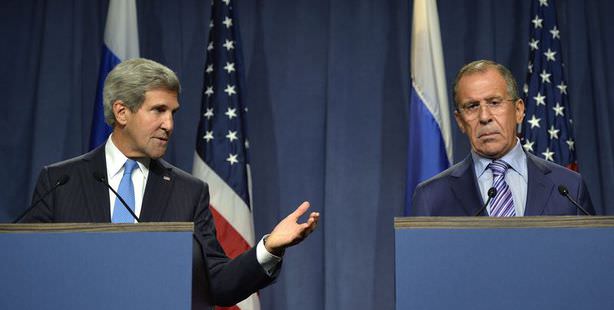 U.S. and Russian FMs hashed out a Russian proposal accepted by Syria to place its chemical arms stockpile under international control. Kerry and Lavrov expressed hope for the move despite "immense" difficulties that lie in the way of actually implementing it.

US Secretary of State John Kerry and Russia's Foreign Minister Sergei Lavrov have announced they are ready to flesh out a diplomacy move to deal with Syria's chemical weapons program. "Immense" difficulties exist, but the move would go ahead, said Kerry during a joint press conference with Lavrov following their bilateral meeting in Geneva. A plan tabled by Russia earlier this week aims to place Syria's deadly gas stockpiles under international control and have the regime abide by an international convention banning chemical weapons.

Lavrov said a solution would make any strikes "unnecessary", while Kerry said a solution through peaceful means would be "clearly preferable" and would spell a "historic moment" in the global fight against chemical weapons use. Kerry said the chemical weapons attack on August 21 that the US says killed nearly 1,500 people remains a "stain" on the world's conscience. He said that the initiative was "not a game," and urged Damascus to keep its promises.

The Syrian government has confirmed the plan, and said it would sign the international agreement banning chemical weapons. The United Nations has also said it has received the necessary documents from Syria to initiate the signing process.

The talks between Kerry and Lavrov in Geneva are planned to continue until Friday, however they may extend into Saturday. Kerry will also meet joint UN-Arab League Envoy Lakhdar Brahimi in Geneva.

Words are 'not enough'

After weeks of heated speculation on a US-led military response to last month's gas attack in Syria, the US and Russia now hold out hope for a diplomatic solution. Washington and Moscow earlier signaled echoing positions on the plan, describing it as an opportunity not to be missed. However, the two countries still admit reservations. The US says the military option remains on the table in case diplomacy fails, while Russia warns against unilateral action, urging the international community to work through the United Nations. The US and Russia continue to maintain a difference of opinions on the gas attack, especially when it comes to who was actually responsible for it.

Lavrov's plan, which he announced on Monday, requires the Syrian regime to join the Chemical Weapons Convention and disclose its chemical weapons program, which Kerry said the Syrian regime has thirty days to do. Kerry's stance on the Syrian government seconds Obama's earlier statement that there is lingering skepticism on the US side towards the regime's credibility.

"This is not a game. It has to be real, comprehensive, verifiable, credible, and timely... Finally, there ought to be consequences if it doesn't take place," Kerry said. "The words of the regime, in our judgment, are simply not enough."