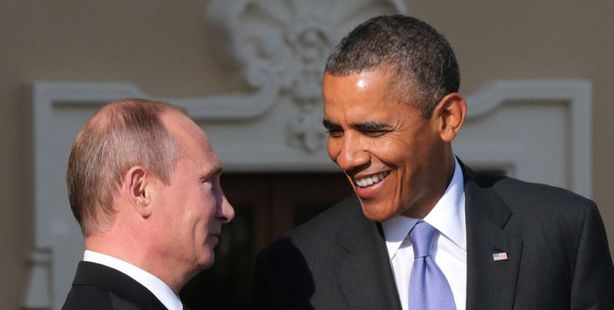 U.S. President Obama says the current developments in regards to Syria shows the issue can be resolved through diplomatic means rather than force. Obama also shared that he and Iranian President Hassan Rouhani have reached out to one another via letters.

U.S. President Barack Obama was a guest on the U.S. television broadcast program "The Week" during which he stated, "With a credible threat of force, combined with a rigorous diplomatic effort, you can strike a deal." Obama also commented that Russian President Vladimir Putin has acted considerably constructive and stated that despite their differences, he believes that they will find a way together to ensure the eradication of Syria's chemical arsenal. "And so I welcome him being involved. I welcome him saying, I will take responsibility for pushing my client, the Assad regime, to deal with these chemical weapons," said Obama.

The U.S. President did however; comment on Putin's allegation the opposition may have been responsible for the chemical weapons attack in Syria on August 21, by stating, "Nobody around the world takes seriously the idea that the rebels perpetrated this attack."

During the interview, Obama also touched upon U.S. - Iran relations and inferred that he has been in contact with Iranian President Hasan Rouhani through an exchange of letters, the content of which he did not reveal.

Obama underlined that Iranians must realize that the nuclear arms issue is an even larger issue that chemical weapons and stated, "They shouldn't draw a lesson to think that since we haven't struck Syria, we won't strike Iran. On the other hand, what they should draw from this lesson is that there is the potential of resolving these issues diplomatically."

'Threat of force is real"

Arriving to Jerusalem yesterday, U.S. Secretary of State John Kerry warned, "the threat of force is real" should the Syrian regime not fulfill their obligations to discard their chemical arms stockpile.

French President Francois Hollande also commented on the agreement between Russia and the U.S. by stating that although it was a significant step, it is not enough to finalize the crisis. Hollande also stated that the proposal to be submitted to the UN Security Council must absolutely include the option for a military operation otherwise; he said the draft will not be binding.

During a meeting held in Istanbul, the Syrian National Coalition elected Ahmed Tumeh as the new interim Prime Minister. Tumeh, a 48-year-old dentist, was elected by 75 votes from a total 114 members.

The Syrian government has sent in an application to join the 1992 Chemical Weapons Convention, which has been received by UN Secretary-General Ban Ki-moon. Meanwhile, Ki-moon has also received the report prepared on chemical weapons use in Syria by UN exports and is expected to share the details with UN member states on Monday.

Meanwhile, in charge of implementing the Chemical Weapons Convention is Ahmet Uzumcu, a Turkish Ambassador and Director-General of the Organisation for Prohibition of Chemical Weapons (OPCW) , who has also served as the consul at the Consulate General in Aleppo.

According to the London-based Syrian Network for Human Rights (SNHR), Assad forces killed at least 85 people in several cities throughout the country on Sunday, with 21 killed in the capital Damascus alone.