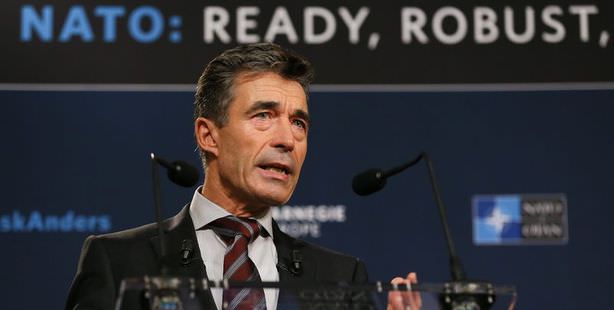 NATO Secretary-General Rasmussen stated on Thursday that it was crucial to keep the military option on the table in dealing with the crisis in Syria.

Speaking at the Carnegie Europe Institute, NATO Secretary-General Anders Fogh Rasmussen stated that the military option will remain on the table with Syria irrespective of the UN Security Council decision.
Acknowledging that the threat of military force exerted on Syria has allowed diplomacy to progress to a specific level, Rasmussen stated, "I think it is essential for keeping momentum in the diplomatic and political process that the military option is still on the table."

Rasmussen also commented on Turkish forces shooting down a Syrian helicopter on Monday by stating that Turkey has relayed information regarding the downed Syrian helicopter along Turkey's border to NATO and expressing that they were well aware, the helicopter had violated Turkey's airspace. "There is no reason for me to suspect anything from the information we have received," said Rasmussen.