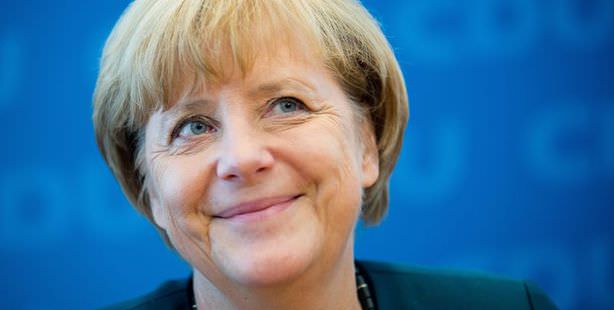 According to initial results, yesterday German voters reelected German Chancellor Angela Merkel, who has run the largest economy in Europe over the past eight years, for a third term. Should Merkel be unable to secure an absolute majority, she is expected to form a large coalition with SPD.

Angela Merkel was reelected to serve her nation for an additional four more years and a possible third term as chancellor in the general elections held in Germany on Sunday. According to the poll results, Merkel's conservative bloc, the Christian Democratic Party (CDU) and the Christian Social Union (CSU) received 42.5 percent of the vote, which brings Merkel's party up by 8.5 percent, and is the highest public support the party has garnered since 1990. These results may secure the conservatives an absolute majority on their own, however if not she may have to form a coalition with the main opposition Social Democrat Party (SPD) which won 26.5 percent of the vote.

In the election yesterday, in which 62 million upheld the right to vote, Merkel's coalition partner over the past four years the Free Democrats Party (FDP) received just 4.7 percent of the vote. The Greens won eight percent, the left party 8.5 percent and the new Alternative for Germany (AfD) received 4.8 percent. According to the five percent threshold for parties to garner seats in the assembly, both the FDP and the AfD will not have representation in the federal parliament.

Addressing party members as the final poll results were being tallied, Merkel stated, "It is a super result. We will do all that we can to ensure Germany's success in the years to come." The German Chancellor also added that it was too early to discuss the forming of a possible coalition.

SPD leader Peer Steinbrueck expressed late on Sunday, "Our party did not received the results we expected. The ball is now in Merkel's court. She has to put together a majority in parliament."

The official results are expected to be released today. Should Merkel's party win an absolute majority in the Federal Parliament with 304 seats out of the total 606, then she may be able to serve a third term on her own, a success which no party in Germany has experienced over the past 50 years. In addition, only two other chancellors, Konrad Adenauer and Helmut Kohl, have ever been elected for a third term. Should Merkel's party fail to obtain an absolute majority in the assembly, then Merkel is expected to engage in coalition negotiations, which may last weeks and even months.

Eleven candidates of Turkish heritage were also elected to serve in the Bundestag, the country's lower house of parliament, in the German general elections held on Sunday, according to initial poll results.