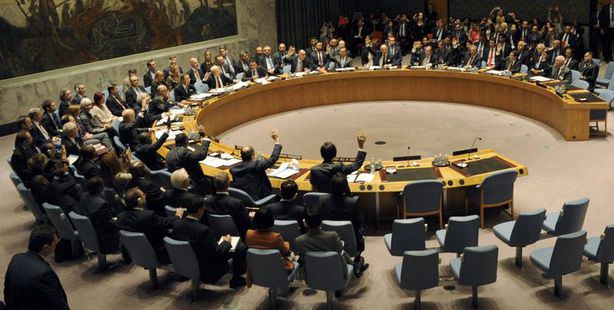 The UN Security Council unanimously approved a landmark resolution for the eradication of Syria’s chemical weapons stockpile in a vote held on Friday.

The United Nations Security Council has unanimously voted in favor of passing a landmark resolution on the disposal of Syria's chemical arms arsenal. All 15 members approved the resolution, which was voted on in New York on Friday night. The resolution formally endorses a decision, which was made hours earlier on Friday by the Organization for the Prohibition of Chemical Weapons to accept the Russia-U.S. disarmament plan.

The resolution, which is the UNSC's first made on Syria, outlines the details of placing Syria's chemical weapons stockpile under international control and ultimately eradicating them. In addition, the resolution sets out a number of key steps decided on at the Geneva I meeting, including establishing a transitional governing body. The resolution also condemns in the strongest terms any use of chemical weapons in violation of international law and especially the August 21st attack on Ghouta.

The UN resolution, which was agreed upon on Thursday, does not carry the threat of military force should Syria refuse to comply with inspectors. Although the resolution makes the measure legally binding, it provides no means of automatic enforcement through sanctions or military force. The only reference to enforcement is the threat of the council imposing punitive measures under Chapter 7, which would require a second resolution that could be vetoed by Russia. Initially, the U.S., Britain and France had wanted the resolution to state explicitly that it was subject to Chapter 7 of the UN charter, which grants the council authority to enforce rulings with measures that include sanctions or military force.

Speaking after the vote, UN Secretary-General Ban Ki-moon commended the international community for taking firm action. Ki-moon also pointed out that the civil war-stricken nation is still facing an enormous humanitarian crisis and called for additional action to bring an end to the violence in Syria.

"Today's historic resolution is the first hopeful news on Syria in a long time," UN Secretary-General Ban Ki-moon told the council immediately after the vote. Ki-moon added that the sides in Syria must be involved in the upcoming Geneva 2 conference, which he said was set for mid-November. Referring to the upcoming convention as a significant step towards, "the creation of a democratic state that guarantees human rights for all of Syria," Ki-moon said, "The regional actors have a responsibility to challenge those who will actively undermine the process and those who do not fully respect Syria's sovereignty, unity and territorial integrity," he added.

DIPLOMACY CAN DEFUSE WEAPONS OF WAR

United States Secretary of State John Kerry also commented on the passing of the resolution, which he said proved that diplomacy was "so powerful it can peacefully defuse weapons of War." Kerry stated that the Assad regime carries the burden of meeting the terms of this agreement," and added that Syria cannot select or reject the inspectors and must give them unfettered access, "otherwise there will be consequences." Noting that inspections will begin by November and that the weapons should be destroyed by mid-2014, Kerry stated, "This resolution makes clear that those responsible for this heinous act must be held accountable."

Russian Foreign Minister Sergei Lavrov also commented on the passing of the UN resolution on Friday by pointing out the fact that it is not subject to Chapter 7 and therefore does not allow any automatic enforcement of coercive measures. Lavrov stressed that the resolution will have to be observed by the opposition as well as the authorities and stated, "The responsibility for the implementation of this resolution does not only lie on the government of Syria." Lavrov added that according to the resolution, the Syrian opposition will also be obliged to work with international inspectors in line with Security Council resolution. Lavrov also added that the Security Council would be ready to take punitive measures in the event of the resolution being violated by either side.