Step by step to Geneva 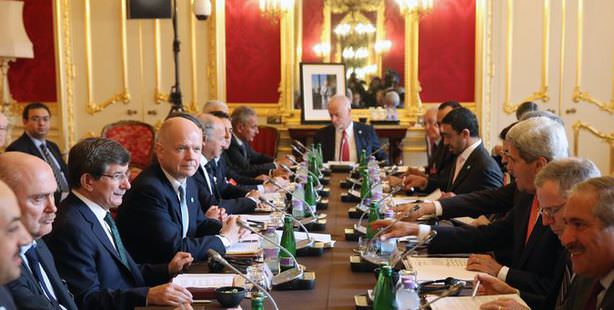 The Friends of Syria Group met in London on Tuesday, as a precursor to the upcoming peace conference in Geneva. The meeting, aimed to convince the Syrian opposition to attend the Geneva 2 Conference, resulted in the release of an 18-item communiqué.

The Friends of Syria Group convened in London on Tuesday in a final attempt to convince the Syrian opposition to attend the upcoming Geneva 2 Conference. The meeting, referred to as the "London 11", brought together foreign ministers from Turkey, the USA, France, Egypt, Germany, Italy, Jordan, Qatar, Saud Arabia, the UAE and Britain as well as representatives from the Syrian opposition umbrella group the Syrian National Coalition. The core group of members of the Friends of Syria Group also released an 18-item communiqué geared towards putting an end to the civil war and securing a safe political transition in Syria.

SYRIAN NATIONAL COALITION TO ATTEND IF GIVEN A GUARANTEE

Speaking at a press meeting following the London conference, considered to be a precursor to the grander-scale peace talks scheduled for November 23 in Geneva and a last-ditch effort to secure participation in the upcoming international conference by the Syrian opposition, Foreign Minister Ahmet Davutoğlu stated that the Syrian National Coalition is expecting certain concerns to be alleviated before they could commit to participating in talks at the Geneva Conference.

"We will be continuing our efforts to alleviate the opposition's justified concerns. They have expressed that if certain nations, including Turkey, offer them a guarantee then they will attend the Geneva Conference," said Davutoğlu. Meanwhile, the Syrian National Coalition has stated that they will announce whether or not they plan to take part in the Geneva Conference within the next ten days. However, the Syrian National Council, which is the strongest group amongst the Syrian opposition coalition, has announced that they will not be attending the conference scheduled in late November in the Swiss city. Meanwhile, a defiant Assad recently announced that there were no obstacles to his running in the 2014 presidential elections

TRANSITIONAL GOVERNMENT TO NOT INCLUDE ASSAD AND HIS ASSOCIATES

The following are a series of noteworthy items included in the communiqué released during yesterday's 'London 11' conference:

* The 'London 11' nations, which make up the Friends of Syria Group, are in support of the formation of a transition government.

* London 11 members have reached a consensus that when a transitional government is formed, Bashar Assad, and his associates with blood on their hands, should be excluded entirely from the nation's administration and should bear absolutely no influence.

* The Assad regime is responsible for the increasing violence in Syria and is obstructing the establishment of a transition government.

* We are calling on the Syrian National Coalition to take part in the Second Geneva Conference.

* Humanitarian aid must be procured immediately for areas where thoursands of civilians are in need, and especially in the suburbs of Damascus, Homs, Aleppo and Haseki.

* We will continue to support the efforts exerted by nations who have opened their doors to refugees and the international community.

* We share concerns regarding the spread of radical groups such as the Iraq and Sham Islamic State (ISIS) and Al Nusra.

* The Geneva Conference must fulfill two basic aims: A) The formation of a fully-authorized transition government. B) Parties should engage in the steps to transition to a democracy and must adopt democratic principles.

* The Syrian regime and the Syrian National Coalition should, prior to the Geneva Conference, announce to the public that they accept the Geneva Communiqué which foresees a political transition.

* All nations to take part in the Geneva Conference must exhibit a full commitment to a political transition.

* Negotiations between the Syrian regime and opposition groups will take place with a delegation consisting of a single-member each from both sides.

'ANKARA IS PLEASED WITH RELEASED COMMUNIQUE'

The communiqué released by the 'London 11' following Tuesday's meeting includes the exclusion of Assad and his associates who have blood on their hands as being any sort of influence in the fully-authorized transition government. Turkey's Foreign Ministry sources emphasize that the communiqué reflects their demands and views entirely. Officials say, "For the regime to sit down to the table will in a sense mean that they have initially agreed to the conditions."