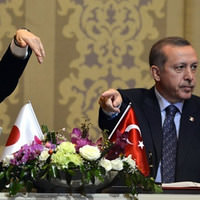 Prime Minister Abe took the time to address members of the press regarding his trip to Turkey at Tokyo's Haneda airport, shortly before boarding his flight.

This visit will be Abe's second since obtaining office less than a year ago.

During his address he stated that "(Turkey) is a very important country."

"I would like to solidify the relationship of mutual trust between leaders," said Prime Minister Abe.

During his previous visit to Turkey, a Japanese-French consortium had won a bid to build a nuclear reactor on Turkish Black Sea coast, a project which carries a 22 billion dollar price tag.
His last visit was also fruitful in that it resulted in the signing of an agreement between him and Prime Minister Erdoğan, which allows for Japanese countries to build nuclear reactors within Turkey.

Another high profile guest that will visit Turkey later this week is King Harald V of Norway, who shall be in Turkey between the 5th and 7th of this November. During his visit he plans to address the issue of renewable energy with President Abdullah Gül, a field in which Norway is a global front runner. The last visit paid by a Norwegian King was in 1926, when diplomatic relations between Turkey and Norway were first established.
Last Update: Oct 30, 2013 1:54 pm
RELATED TOPICS