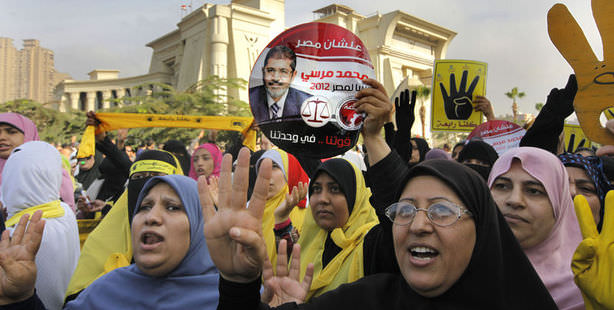 As ousted Egyptian President Mohamed Morsi appeared in court for the first time on Monday on alleged charges of inciting violence in demonstrations outside Cairo’s Presidential Palace late last year, anti-coup demonstrators took to the streets nationwide in protest.

Egypt's first democratically elected President Mohamed Morsi, who was ousted in a coup in early July, faced trial in an Egyptian court held at the Police Academy in the capital for the first time on Monday as anti-coup demonstrators flocked to the streets in protest. President Mohamed Morsi is facing charges along with 14 co-defendants and senior members of the Muslim Brotherhood for inciting violence, which led to the deaths of protesters outside of Cairo's Ittihadiya Presidential Palace in December of last year.

Egyptian state media has reported that Monday's session, which was held at the Police Academy in Cairo, ended in an adjournment of the trial to January 8, 2014 to allow defense lawyers to review documents. Morsi and his 14 other co-defendants will remain in custody until the trial resumes early next year. If found guilty, the charges Morsi faces could result in aggravated life imprisonment or even the death penalty.

Images of Monday's proceedings showed Morsi in a suit and according to reports, he refused to obey a court order to wear a prison uniform to trial. Morsi supposedly also refrained from signing documents regarding the charges and told the presiding judge that he is still the President of Egypt and that it was the judiciary that was illegitimate and asked the court to let him exercise his presidential duties.

Morsi also made the globally-acknowledged 'Rabia' sign as protests ensued by defendants in court. Referring to the court as illegitimate, Morsi stated that those who staged the military coup are the ones that should be standing trial. Morsi's co-defendants senior Muslim Brotherhood leaders Essam al-Erian and Mohammed al-Beltagui, chanted, "the judiciary is illegitimate and down with military rule" as they also reportedly made the now-popular Rabia sign.

MORSI TO BE HELD IN ALEXANDRIA, CO-DEFENDENTS IN CAIRO

Egyptian state television also announced on Monday that Mohamed Morsi is to be held at the Borg El Arab Penitentiary in Alexandria, while his co-defendants returned to Tora Prison in Cairo. Ever since his ousting in July, Egypt's first freely elected President had been held in custody in an undisclosed location.

ANTI-COUP DEMONSTRATORS TAKE TO THE STREETS

Anti-coup protesters flocked to the streets on Monday in support of Morsi. A majority gathered in front of the Constitutional Court to protest the trial of the nation's first freely elected leader. Protesters, which included a significant number of women, chanted slogans calling for legitimacy and rights to be returned while they held up photographs of Morsi and made the now well-known Rabia sign. The numbers of protesters increased throughout the day as marches ensued in Cairo and other towns destined for the Constitutional Court in the capital. Private schools were also shut down for the day in a majority of regions throughout the country as a preventative measure against the potential escalation of violence.

"THOSE TRYING MY FATHER ARE MUBARAK UNDER A DIFFERENT MASK"

Mohamed Morsi's son Ahmed Mohamed Morsi commented on Monday's trial by stating, "Those that are trying my father are Mubarak himself, yet wearing a different mask." In a statement released for the start of his father's trial, Ahmed Morsi stated, "The legitimate president is being tried where Mubarak was once tried. They are trying my father for Mubarak." Ahmed Morsi also addressed the valued millions awaiting their legitimate leader by stating that they would be refraining from attending the hearing in order to not become fake observers" to what he said was an illegitimate trial.