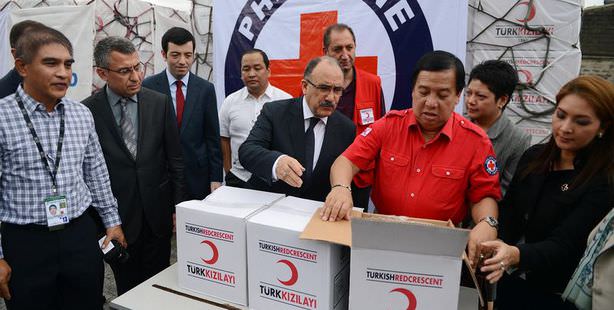 Turkey took immediate action upon orders of Prime Minister Erdoğan to send relief aid and a rescue team to the Philippines after a devastating typhoon hit several Pacific Ocean islands on Friday, which affected nine and a half million people, leaving 620,000 homeless. According to Deputy PM Atalay, the Philippines Red Crescent has set the estimated death toll at 200-300 thousand.

Super Typhoon Haiyan, which hit several Philippines islands on Friday, has left devastation in its wake. According to the United Nations Office for the Coordination of Humanitarian Affairs (OCHA), nine and a half million people have been affected and 620,000 displaced by what if verified, may be the strongest tropical cyclone to hit the ground on record, with wind speed reaching a peak of up to 315 kilometers an hour. Deputy Prime Minister Beşir Atalay, who arrived in the Philippine capital of Manila on Monday with 65 tons of humanitarian aid, says the Philippines Red Crescent estimates the death toll may reach 200-300 thousand.

Turkey was one of the fastest to respond to the need for relief aid for the typhoon-struck country. Even before the extent of the damage caused by the typhoon was clearly understood, Turkey had already initiated efforts to determine, how and in what way they could help. During a ceremony held to commemorate the death of the Republic's founder Ataturk held at Anıtkabir in the capital on Sunday, Prime Minister Erdoğan delivered the order that either one of his deputy prime ministers Beşir Atalay or Bekir Bozdağ, mobilize to visit the humanitarian disaster on site.

Within hours, Turkey's Disaster and Emergency Management Presidency (AFAD) immediately began preparing a humanitarian aid delivery consisting of 90 tons of relief items including tents, blankets, kitchen equipment and basic needs. However, the capacity of the Turkish Red Crescent cargo plane was only able to transport 65 tons of the aid collected. The aircraft, which also carried a rescue team, landed at 16:00 local time on Monday and the aid was delivered to the Philippines Red Cross.

Upon landing, Deputy Prime Minister Beşir Atalay drew on the significance of Turkey acting fast to deliver aid to the disaster-struck region and said Turkey was prepared to provide any form of aid to the Philippines. Atalay also explained that he would be meeting with his Philippine counterpart on Tuesday to whom he will extend Turkey's condolences and will discuss whether they have any further requests for aid. Atalay also shared that Prime Minister Erdoğan sent a telegraph to his Philippine counterpart extending his condolences and Turkey's offer to send further relief efforts.

President of the Philippines Red Cross Richard J. Gordon thanked Deputy Prime Minister Atalay for the humanitarian aid, which he said he would distribute to those suffering from the devastation in the typhoon-hit country.

Deputy Prime Minister Atalay also shared plans to meet with the Under-Secretary-General for OCHA Valerie Amos on Tuesday, and to make a joint international call for humanitarian aid to be sent to the region.

A number of international organizations such as the 21-country member United Nations, including Australia, Belgium, Canada, Indonesia, Israel, Japan, the USA and England as well as UNICEF, the European Commission, Doctors without Borders and Oxfam have pledged to send aid to the devastated country.

According to UNICEF, four million children reside in the areas highly affected by the typhoon. The United Nations Children Fund has been rushing to deliver 60 tons of humanitarian aid, which UNICEF Philippines Representative Tomoo Hozumi says they expect to land in the region on Tuesday.