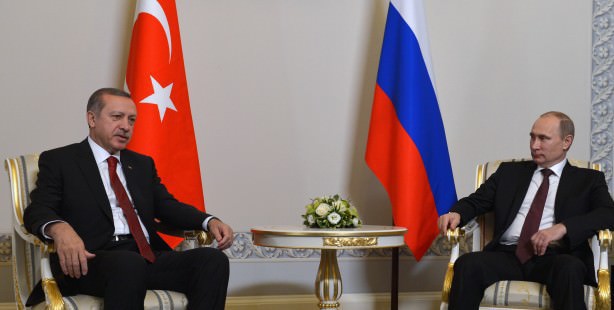 PM Erdogan stated that the relations between Turkey had reached an enviable point, and that the cooperation between the two countries would in turn benefit both militarily, politically, economically and culturally.

Both leaders made certain to emphasize the close relations that the two nations have had in recent times, President Putin stating, "Meanwhile, relations between Russia and Turkey have been developing successfully even without our direct involvement"

Working together to find a solution in Syria, and how the conflict has not affected the relation of the two countries was on the agenda.

"I believe that we can take significant steps in the Syrian, Azerbaijani, and Armenian issues," said Erdogan.

"We may have discrepancies on some issues, but this will not lead to the cooling of our relations," said Putin. "On the contrary, we contact more closely and search for points of coincidence."

Perhaps due to both nations being major trading partners, the topic of future trade relations was also touched upon.

Turkey's trade volume with Russia currently stands at 34 billion, up from 5 billion in 2002 and increase of 24%.

In regards to Turkey's ambitions to raise the bilateral trade volume to 100 billion, Pm Erdogan said "I believe that our entrepreneurs are ready. We continuously inspire them in this regard."

As energy remains one of the major ties between the relations of Turkey and Russia, the meeting of the two leaders yielded positive gains in this aspect as seen through the signing of the agreement to build the "Akkuyu nuclear power plant". The plant, to be built in the southern province of Mersin is to create 35 billion kilowatt-hours per year of energy, while supplying the province with 15,000 jobs.