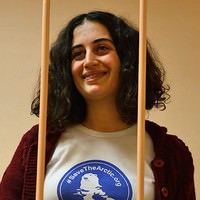 Akhan, who was arrested along with 29 of her colleagues aboard the Greenpeace ship, Arctic Sunrise, while protesting the oil drilling on the Arctic Ocean of the coast of Russia. Of the 30 arrests 28 were activists while 2 were journalists, the participants originated from 18 different countries.

The 29 are now charged with piracy, hooliganism and mistreatment of security forces, charges that carry a maximum sentence of 7 years in Russia.

During her 2 months of incarceration many petitioned for her release, including Foreign Minister Davutoglu who wrote a letter to his Russian counterpart Sergei Lavrov. 4 politicians from 3 different political parties in Russia also pleaded for Akhan's release, 3 of them attending her indictment at the courthouse as a show of support.

These last few days saw some of the protestors released on bail, amongst them Gizem Akhan.