President Gül: “Mandela was a leader who put an end to racism” 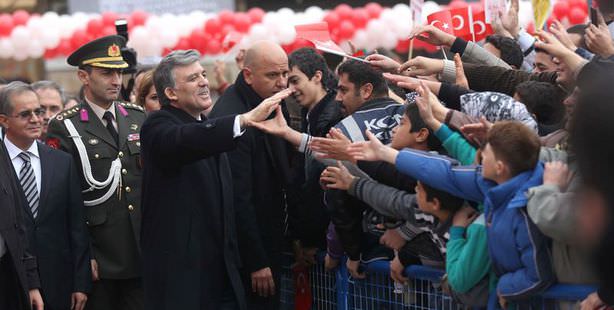 President Gül paid tribute to the late Nelson Mandela on Friday by stating that he was a great figure as a defender of human rights and brought an end to racism in his native South Africa.

As the world mourns the loss of South Africa's first-ever black president Nelson Mandela, who passed away at the age of 95 on Thursday after a long battle with a lung infection, President Abdullah Gül commended the former president for being a great figure, man and political leader who put an end to racism in South Africa.

Speaking to members of the press while visiting the Southeastern province of Gaziantep, President Gül also commented on news of the release of Turkish journalist Metin Turan from an Egyptian prison and stated that the people of Egypt have always been brothers for Turkey. "Egypt is undoubtedly experiencing an extraordinary period. For Turkey, the people of Egypt have always been brothers. However, in the history of the two nations from time to time there have been difficult periods. This will also come and go. We have also experienced extraordinary periods in our own past. We hope that Egypt will become a democracy as soon as possible and will embark on an era in which it uses all of its strength and energy on the public's expectations of improving economic development and welfare."

President Abdullah Gül also paid tribute to Nelson Mandela, South Africa's first black president who was elected to office after spending 27 years in prison by stating, "Mandela was a great figure and a great man not only as a statesman but even before that as a defender of human rights. He brought an end to racism through the struggle he staged in his own country. His loss is deeply saddening."

A TOUR OF ZEUGMA

In response to a question regarding recent developments towards exempting visas for Turkish nationals travelling to EU nations, President Gül stated, "While the EU has signed on to visa exemption agreements with a number of nations which aren't even candidate countries, spanning from Latin America to Russia and the Balkans, it is unacceptable that they apply such harsh visa regulations on Turkey. I hope that within a few years time Turkish nationals will have earned the right to travel completely visa-free throughout Europe.

While in Gaziantep, President Gül also held a closed meeting with UN representatives at the Gaziantep Governorship and paid a visit to Hasan Kalyoncu University as well as toured the Zeugma Mosaic Museum with the First Lady Hayrünnisa Gül.

This is a translation of an article originally written by Mehmet Boncul and Adsiz Günebakan.