"No deal on the Mavi Marmara” 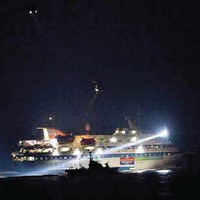 The Turkish Foreign Ministry falsified the Israeli newspaper Haaretz’s report stating that “Turkey has accepted lowered reparation amounts for the victims of the Mavi Marmara”.

The Turkish Foreign Ministry falsified the Israeli newspaper Haaretz's report stating that "Turkey has accepted lowered reparation amounts for the victims of the Mavi Marmara".

The acceptance of the reparation terms for the victims of the attack on the Mavi Marmara was the key condition behind bringing the two sides back together to the negotiation table quickly progressing relations. Our sources within the foreign ministry stated that there was no proposal put forth from Turkey, and that speculations on the acceptance of lowered reparations was false. We were told that Turkey would not budge on aforementioned amount for the payments, and that negotiations towards a just solution were still underway.

The Israeli newspaper Haaretz aired a story on how Turkey lowered the conditions of reparation to be made for the victims of the Mavi Marmara. A high level official at the newspaper stated they learned that Turkey had become more flexible on their demands for reparations, allowing for the publishing of this story. Officials at the Turkish foreign ministry stated that "Reparations are just one aspect. How and why this happened are still under debate. This is a very multi-faceted agreement." They said that after these technical meetings conclude, a political decision will be made.

The signal for meetings as come

The source at the foreign ministry stated that developments of the topic of reparations way be soon to come. "Though due to certain reasons there was a halt, we have nearly reached the end of these discussions. We expect to reach a solution in less than a few months.