Hamburg protesters prove to be peaceful by pillow fight 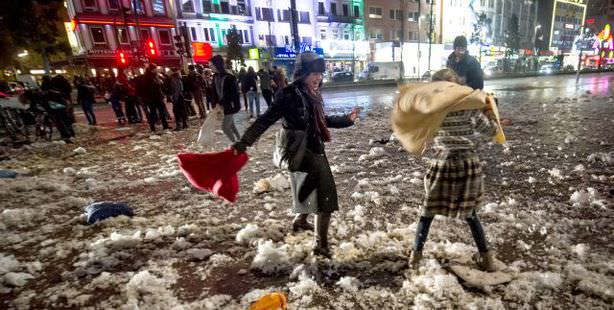 Activists in Hamburg stage pillow fights to gain the upper hand against police forces to protest the closure of the “Roten Flora” culture center.

Demonstrators met at Spiel-Buden Square, located near Davidwache Police Department, last night. Approximately 1000 activists gathered after networking on social media and staged pillow fights, scattering the feathers as a means of protest against the closure of the "Roten Flora" culture center.

Demonstrators stated that police forces try to justify their unbalanced force by claiming that they are resorting to violence. "We protest using the softest object. Let's see what they are going to do now," they said. They also expressed that all they want is social prosperity and that they are protesting high home rental prices, unemployment, privatization, social injustice. They are determined to continue their protests until the removal of the danger zone.

Small-scale protests carry on every weekend, in Hamburg. Police forces did not intervene in the peaceful protests until the leftist groups began protesting the closure of the "Roten Flora" culture center in Dec 21, in Hamburg.

Altona, Sankt Pauli and Sternschanze cities were declared "danger zones" due to continuous protests and harsh security precautions taken in these areas.